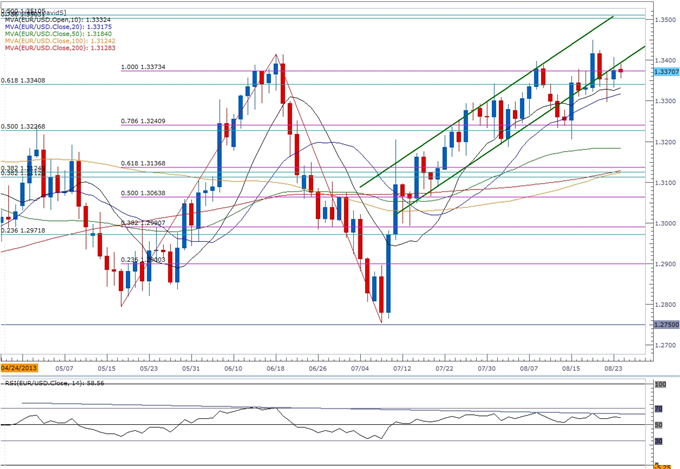 Will Another Drop in Consumer Confidence Threaten USD Support?

U.S. Consumer Confidence is expected to narrow for the second month in August and a marked downturn may produce a spark a selloff in the U.S. dollar as it raises the Fed’s scope to maintain its highly accommodative policy stance over the near to medium-term.

Another drop in household confidence may dampens bets of seeing the FOMC taper its $85 asset-purchase program at the September 17-18 meeting, and the central bank continue to delay its exit strategy in an effort to encourage a stronger recovery.

The slowdown in private sector consumption could be indicative of a further slowdown in household sentiment, and a dismal print is likely to drag on the USD as it dampens the outlook for growth and inflation.

Nevertheless, the more broad-based recovery in the housing market may help to prop up consumer confidence, and an unexpected uptick in the Conference Board’s survey may produce a more meaningful rebound in the reserve currency amid the growing discussion at the Fed to scale back on quantitative easing.

Impact that the U.S. Consumer Confidence survey has had on USD during the last month

U.S. household sentiment fell back from a five-year high, with the Conference Board’s survey narrowing to 80.3 from a revised 82.1 in June, but the recent weakness is likely to be short-lived as the economic recovery is expected to gradually gather pace in the second-half of the year. Despite the weaker-than-expected print, the initial reaction was short-lived as the headline figure marked the second-highest reading since January 2008, but we saw the greenback consolidate throughout the North American trade as the pair ended the day at 1.3261.