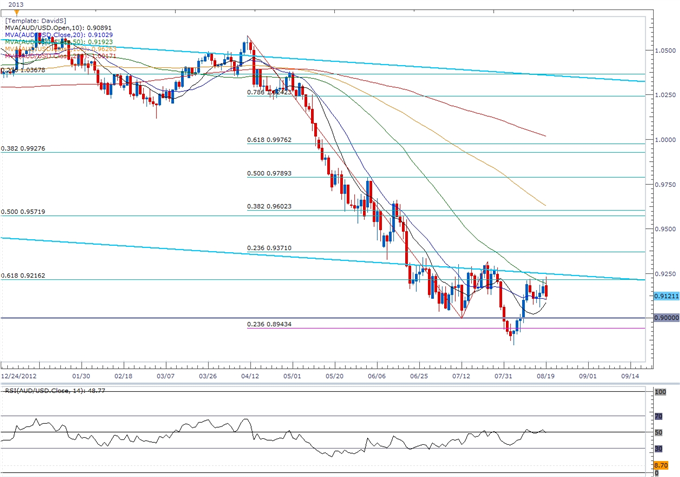 AUD at Risk on RBA Minutes- Verbal Intervention on Tap?

The Reserve Bank of Australia (RBA) Minutes may drag on the AUDUSD should the central bank show a greater willingness to further embark on its easing cycle.

Although there’s speculation that the RBA delivered its last rate cut at the August 6 meeting, Governor Glenn Stevens may continue to strike a cautious outlook for the region amid the slowing recovery, and the central bank head make further attempt to talk down the Australian dollar in an effort to balance the risks surrounding the region.

The RBA may talk down bets for lower borrowing costs amid the rise in private lending, and we will need to see the central bank endorse a neutral policy stance to see a more meaningful rebound in the Australian dollar.

Nevertheless, Governor Stevens may continue to push for a weaker exchange rate in order to stem the downside risks for growth and inflation, and the bearish sentiment surrounding the higher-yielding currency may gather pace over the near to medium-term should the interest rate outlook deteriorate further.

Should the RBA soften its dovish tone for monetary policy and talk down bets for another rate cut, we will then need to see a green, five-minute candle following the statement to consider a long entry on two-lots of AUDUSD. If the market reaction favor a long aussie-dollar trade, we will set the initial stop at the nearby swing low or a reasonable distance from the entry, and this risk will establish our first target. The second objective will be based on discretion, and we will move the stop on the second lot to cost once the first trade hits its mark in an effort to protect our profits.

On the other hand, the RBA may try to talk down the Australian dollar amid the weakening outlook for growth and inflation, and we will carry out the same setup for a short aussie-dollar trade as the long position mentioned above, just in the opposite direction.

The AUDUSD appears to be carving a lower high in August as it struggles to hold above the 61.8% Fibonacci retracement around 0.9210-20, and we may see the pair move back below the 0.9000 handle as the RBA favors a weaker currency. However, the RBA may revert back to its wait-and-see approach after pushing the benchmark interest rate to a fresh record-low, and we may see a more meaningful rebound in the exchange rate should the central bank bring its easing cycle to an end.

Although the Reserve Bank of Australia kept the door open for another rate cut, the central bank appeared to have softened its dovish tone for monetary policy as they retain a wait-and-see approach for monetary policy. Easing bets for a rate cut propped up the Australian dollar, with the AUDUSD climbing above the 0.9150 region, and the higher-yielding currency continued to gain ground against its U.S. counterpart as the pair ended the day at 0.9250.

Join the Analyst-on-Demand Service to Trade Alongside the DailyFX Research Team!