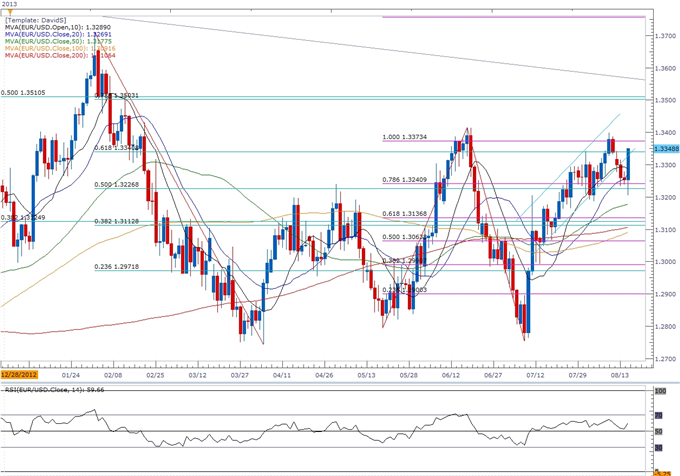 Will U. of Michigan Confidence Keep EURUSD Capped at 1.3400?

A rebound in the U. of Michigan Confidence survey should heighten the appeal of the U.S. dollar as it adds to the argument for the Federal Reserve to taper its asset-purchase program at the September 17-18 meeting.

An uptick in household sentiment should instill an improved outlook for the world’s largest economy as private sector consumption remains one of the largest drivers of growth, and we may see a growing number of Fed officials drop their dovish tone for monetary policy as the U.S. economy gets on a more sustainable path.

Signs of a stronger recovery in the second-half of 2013 may encourage a marked rebound in consumer sentiment, and a positive confidence report may produce a more meaning rebound in the reserve currency as it dampens the FOMC’s scope to retain its highly accommodative policy stance.

Nevertheless, subdued wage growth paired with the uptick in inflation may lead to a further decline in household confidence, and a dismal print may produce further weakness in the greenback as it limits the scope of seeing the Fed scale back on quantitative easing in the month ahead.

Should the U. of Michigan survey advance to 85.2 or higher in August, we will need a green, five-minute candle following the print to draw up a sell entry on two-lots of EURUSD. If the market reaction favors a short trade, we will set the initial stop at the nearby swing high or a reasonable distance from the entry, and this risk will generate our first target. The second objective will be based on discretion, and we will move the stop on the second lot to breakeven once the first trade reaches its mark in an effort to lock-in our gains.

In contrast, a reading below market expectations may further dampen the appeal of the USD, and we will carry out the same setup for a long euro-dollar trade as the short position mentioned above, just in reverse.

The EURUSD may make a more meaning run at the 1.3400 handle should the U. of Michigan Confidence survey fall short of market forecast, and the greenback may face additional headwinds ahead of the Fed Symposium scheduled for the following week should the data raise the scope of seeing the central bank retain its highly accommodative policy stance for an extended period of time.

However, should the confidence survey raise the outlook for growth, we may see the EURUSD continue to carve a lower top in August, and the pair may persistently give back the rebound from the previous month as it fails to maintain the bullish trend.

July 2013 U. of Michigan Confidence

The gauge for U.S. consumer sentiment narrowed to 82.7 in June from 84.5 the month prior, while inflation expectations for the next 12-months climbed to an annualized 3.2% to mark the highest reading since March. Indeed, the decline in consumer sentiment dragged on the dollar, with the EURUSD climbing above the 1.3325 region, and the greenback struggled to hold its ground throughout the North American trade as the pair closed at 1.3341.