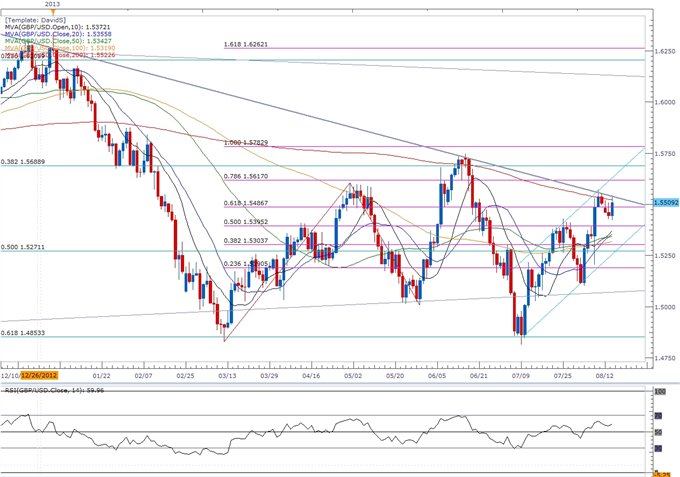 U.K. Retail Sales are expected to increase for the third consecutive month in July and a pickup in private sector consumption may spur a bullish breakout in the GBPUSD as it remains one of the leading drivers of growth.

Should household spending pickup in July, a positive sales report may raise the scope of seeing the Bank of England (BoE) normalize monetary policy ahead of schedule, and the British Pound may continue to outperform against its major counterparts amid the shift in the policy outlook.

The pickup in wage growth along with the ongoing improvement in consumer sentiment raises the scope of seeing a marked rise in retail sales, and a positive print may spark a growing rift within the BoE as Monetary Policy Committee member Martin Weale dissents against the majority.

However, sticky inflation paired with the slowdown in private credit may prompt U.K. households to scale back on spending, and BoE Governor Mark Carney may keep the door open to expand the balance sheet further in an effort to encourage a stronger recovery.

Should U.K. retail sales increase 0.6% or greater in July, we will need to see a green, five-minute candle following the release to consider a buy entry on two-lots of GBPUSD. If the market reaction favors a long trade, we will set the initial stop at the nearby swing low or a reasonable distance from the entry, and this risk will establish our first objective. The second target will be based on discretion, and we will move the stop on the second-lot to cost once the first trade hits its mark in order to protect our profits.

On the other hand, a dismal print should keep the GBPUSD within the downward trend from earlier this year, and we will implement the same strategy for a short pound-dollar trade as the long position laid out above, just in the opposite direction.

Although the British Pound remains stuck in the downward trend from earlier this year, a third straight rise in U.K. retail sales may pave the way for a bullish breakout. In turn, we may see the GBPUSD make a more meaningful run at the 78.6% Fibonacci expansion around 1.5610-20, but the pair may fall back towards trendline support (which lies up with the 38.2% expansion- 1.5300) should the data disappoint.

Impact that the U.K. Retail Sales report has had on GBP during the last month

Retail spending in the U.K. increased another 0.2% after expanding 2.1% the month prior, and the BoE may find it increasingly difficult to preserve its highly accommodative policy stance as the central bank anticipates a faster recovery in the second-half of the year. Indeed, the British Pound trader higher following the print, with the GBPUSD climbing above the 1.5200 handle, and the sterling continued to gain ground during the North American trade as the pair ended the day at 1.5222.