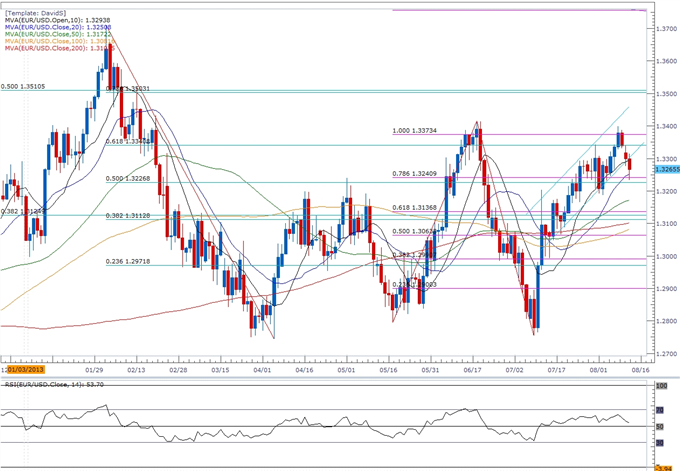 With Germany’s Gross Domestic Product (GDP) report due out ahead of the Euro-Zone print, the developments coming out of Europe’s largest economy may set the tone for the EURUSD as the region is expected to lead the recovery in the monetary union.

Germany is expected to grow another 0.6% in the second-quarter and a positive release may heighten the appeal of the single currency as it dampens the scope of seeing the European Central Bank (ECB) further embark on its easing cycle.

The rebound in business sentiment along with the pickup in global trade may pave the way for a strong GDP report, and a marked expansion in the growth rate may spark a bullish reaction in the EURUSD as it raises the prospects of seeing the euro-area emerging from the recession later this year.

At the same time, the ongoing weakness in the labor market along with the slowdown in private sector consumption may weigh on the growth rate, and we may see the Euro struggle to hold its ground following a dismal print as it fuels speculation of seeing another rate cut from the ECB.

How to trade the Event Risk

Expectations for a faster rate of growth instills a bullish outlook for the single currency, and the market reaction may set the stage for a long Euro trade as market participants scale back bets for additional monetary support. Therefore, if GDP expands 0.6% or greater in the second-quarter, we will need to see a green, five-minute candle following the release to consider a long entry on two-lots of EURUSD. Should the reaction favor buying the single currency, we will set the initial stop at the nearby swing low or a reasonable distance from the entry, and this risk will establish our first target. The second objective will be based on discretion, and we will move the stop on the second lot to breakeven once the first trade hits its mark in an effort to protect our gains.

In contrast, the GDP report may warn of a prolonged recession in the euro-area amid the persistent slack in the real economy, and a weak growth figure may spark a sharp selloff in the single currency as it fuels bets for another ECB rate cut. As a result, 2Q GDP misses market expectations, we will implement the same strategy for a short euro-dollar trade as the long position mentioned above, just in reverse.

The technical outlook points to further EURUSD weakness as it fails to maintain the upward trend carried over from the previous year, and the pair may have carved a lower high just shy of the 1.3400 handle as the ECB keeps the door open to push the benchmark interest rate to a fresh record-low. However, the rebound ahead of the 50.0% Fibonacci retracement (1.3240) may gather pace on a positive GDP report, and we may see a more meaningful run at 1.3400 should the data dampen expectations for additional monetary support.

Europe’s largest economy grew 0.1% during the first quarter after contracting 0.7% during the last three-months of 2012, with the Bundesbank noting that the weaker-than-expected print may have been driven by an unusually long winter season. The Euro struggled to hold its ground following the weaker-than-expected print, with the EURUSD slipping below the 1.2900 handle, and the single currency continued to lose ground throughout the North American trade as the pair closed at 1.2884.