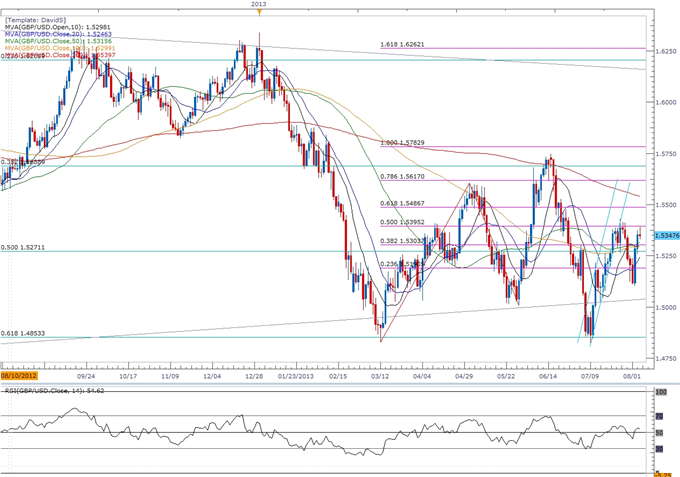 How Will the BoE’s Forward-Guidance Influence the GBPUSD?

The Bank of England quarterly inflation report is likely to heavily impact the British Pound as the central bank is set to announce it updated assessment of the U.K. economy.

With the positive developments coming out of the U.K. economy, the BoE may steer away from adopting a threshold for monetary policy (like the Federal Reserve) and strike a similar tone to the European Central Bank, where the Monetary Policy Committee pledges to keep interests low for an extended period of time.

Nevertheless, should the BoE implement a ‘qualitative approach’ for monetary policy and establish a threshold for unemployment or inflation, such a move could delay the MPC’s exit strategy.

Trading the quarterly inflation may not be as clear cut as some of our previous trades given the market speculation surrounding the central bank, but a more upbeat tone coming out of the BoE may pave the way for a long British Pound trade as the MPC turns increasingly optimistic towards the economy. Therefore, if the BoE raises its fundamental outlook for the region and refrains from implementing a threshold for its forward-guidance, we will need a green, five-minute candle following the release to consider a long entry on two-lots of GBPUSD. Once these conditions favor a long trade, we will place the initial stop at the nearby swing low or a reasonable distance from the entry, and this risk will establish our first objective. The second target will be based on discretion, and we will move the stop on the second lot to breakeven once the first trade hits its mark in an effort to preserve our profits.

On the other hand, should the BoE follow the Fed and implement a ‘qualities approach’ for monetary policy, expectations for a more accommodative MPC may spark a sharp selloff in the GBPUSD. As a result, if the central bank adopts a threshold for its forward-guidance, we will carry out the same strategy for a short pound-dollar trade as the long position mentioned above, just in reverse.

The 50.0% Fibonacci expansion around the 1.5390-1.5400 may continue to hold up as resistance should the BoE adopt a similar approach to the FOMC, and we may see the 61.8% retracement (1.4850) come back on the radar should the pair search for support. However, a mere pledge to keep interests low for a prolonged period may have a limited impact in spurring a major decline in the exchange rate, and the GBPUSD may face whipsaw-like prices before a move higher as it puts in a higher low in August.

May 2013 Bank of England Inflation Report

Although the Bank of England said a recovery is now ‘in sight’ for the U.K., the central bank retained a rather cautious tone for the region as the pickup in economic activity remains ‘weak and uneven.’ Despite the upbeat comments, the British Pound did failed to benefit from the updated forecast, with the GBPUSD slipping below the 1.5200 handle, but the sterling firmed up throughout the day as the pair closed at 1.5233.