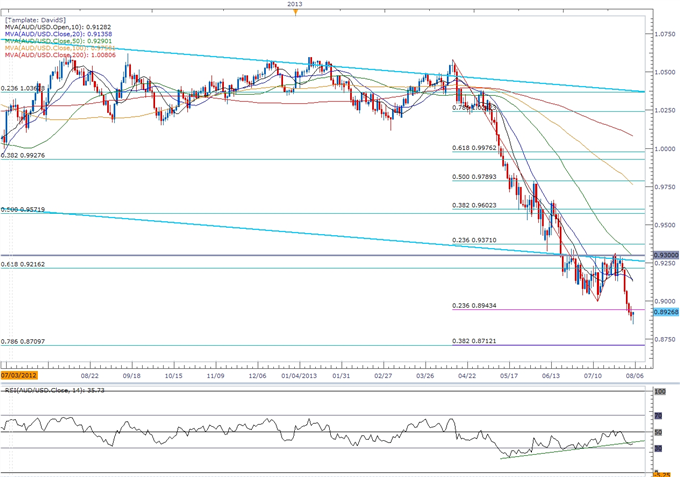 The Reserve Bank of Australia (RBA) is widely expected to push the benchmark interest rate to a fresh record-low of 2.50%, but the policy statement accompanying the rate decision may heavily influence the Australian dollar as market participants weigh the outlook for monetary policy.

After taking extraordinary steps to shore up the $1T economy, there’s speculation that Governor Glenn Stevens will move away from the easing cycle after delivering one more rate cut in August, but the central bank head may look to further insulate the economy as the outlook for growth and inflation remains weak. According to Credit Suisse overnight index swaps, market participants are pricing a 91% for a 25bp rate cut, but still see 50bp worth of rate cuts over the next 12-months as the central bank favors a weaker exchange rate.

The RBA may strike a more neutral tone this time around amid the positive developments coming out of the region, and a less-dovish policy statement may help to prop up the Australian dollar should the central bank scale back its willingness to implement additional rate cuts.

Nevertheless, Governor Stevens may continue to favors lower borrowing costs given the weakening outlook for inflation, and we may see a sharp selloff in the Australian dollar should a rate cut be accompanied by a highly dovish policy statement.

As the relative strength index on the AUDUSD fails to maintain the bullish trend dating back to May, a highly dovish RBA may spur fresh yearly lows in the exchange, and we may see a run at the 78.6% Fibonacci retracement around the 0.8700 handle, which coincides with the 38.2% expansion from the April decline. However, a more meaningful rebound may take shape in the aussie-dollar should the RBA retain its wait-and-see approach, and the pair may continue to threaten the 0.9300 region as it holds up as resistance.

Trading the given event risk instills a bearish outlook for the higher-yielding currency as the RBA is expected to push the benchmark interest rate to a fresh record-low, but a less-dovish statement accompanying the rate decision could pave the way for a long Australian dollar trade as market participants see an end to the easing cycle. Therefore, if Governor Stevens strikes an improved outlook for the $1T economy and talks down bets for lower borrowings costs, we will need to see a green, five-minute candle following the announcement to set us up for a long entry on two-lots of AUDUSD. Should the reaction favor buying the aussie-dollar, we will set the initial stop at the nearby swing low or a reasonable distance from the entry, and this risk will generate our first target. The second objective will be based on discretion, and we will move the stop on the second lot to cost once the first trade hits its mark in an effort to protect our profits.

On the other hand, the RBA may continue to see scope for lower interest rates amid the weakening outlook for growth and inflation, and Governor Stevens may continue to embark on the easing cycle in order to further insulate the economy. As a result, if the RBA cuts the benchmark interest rate by 25bp rate cut and strike a highly dovish tone for monetary policy, we will carry out the same setup for a short aussie-dollar trade as the long position mentioned above, just in the opposite direction.

The Reserve Bank of Australia continued to warn of lower borrowing costs after holding the benchmark interest rate at 2.75%, and the central bank may continue to embark on its easing cycle in the second-half of the year in an effort to prompt a stronger recovery. The Australia dollar struggled to hold its ground following the dovish comments, with the AUDUSD slipping below the 0.9200 handle, and the higher-yielding currency continued to slide throughout the day as the pair closed at 0.9146.