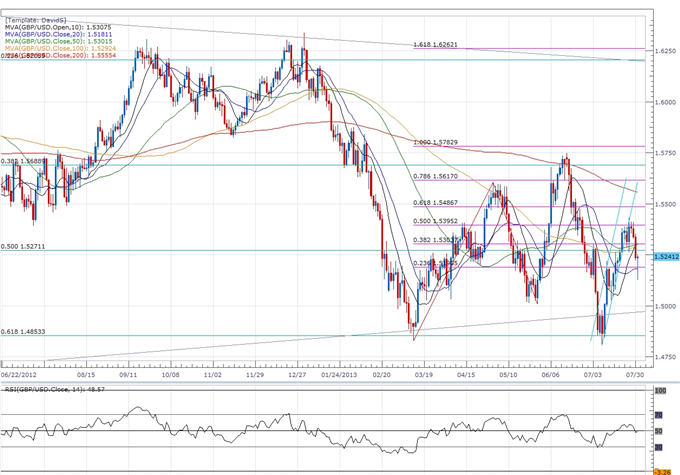 The Bank of England (BoE) is widely expected to keep the benchmark interest rate at 0.50% while maintaining the Asset-Purchase Facility at GBP 375B, and we may see another unanimous vote within the Monetary Policy Committee as the central bank anticipates a stronger recovery in the second-half of the year. Should the MPC refrain from releasing a policy statement, we may see a short-term rally in the British Pound ahead of BoE Minutes due out on August 14, and the central bank looks may slowly move away from its easing cycle over the coming months as the U.K. economy gets on a more sustainable path.

Sticky price growth along with the faster rate of growth may encourage the BoE to adopt a more hawkish tone for monetary policy, and the British Pound may show a bullish reaction to the rate decision should the central bank may start to lay out a more detailed exit strategy.

The BoE may introduce additional measures to shore up the economy amid the ongoing weakness in private sector lending paired with the persistent slack in the real economy, and the sterling may face a sharp selloff should Governor Mark Carney may implement forward-guidance for monetary policy.

Although the GBPUSD pierced below the 23.6% Fibonacci retracement of the 2009 range (1.5190-1.5200), the short-term rebound may gather pace over the next 24-hours of trading should the BoE adopt a more hawkish tone for monetary policy. In turn, any further developments surrounding the MPC’s exit strategy could trigger a larger move back towards the 38.2% retracement around 1.5680-90, but any hints for forward-guidance may dampen the appeal of the sterling as market participants continue to see scope for additional monetary support.

Trading the BoE rate decision may not be as clear cut as some of our previous trades as the central bank retains its current policy, but another unanimous vote may pave the way for a long British Pound trade as market participants scale back bets for additional monetary support. Therefore, if the committee refrains from releasing a policy statement, we will look for a green, five-minute candle following the release to establish a long entry on two-lots of GBPUSD. Once these conditions are fulfilled, we will place the initial stop at the nearby swing low or a reasonable distance from the entry, and this risk will generate our first objective. The second target will be based on discretion, and we will move the stop on the second lot to breakeven once the first trade hits its mark in order to lock-in our gains.

In contrast, the BoE may keep the door open to expand its balance sheet further amid the ongoing weakness in the real economy, and the central bank may strike a dovish tone for monetary policy in an effort to encourage a stronger recovery. As a result, if the committee shows a greater willingness to further embark on its easing cycle, we will implement the same setup for a short pound-dollar trade as the long position mentioned above, just in reverse.

The Bank of England issued a rather dovish statement after maintaining its current policy in July and warned that ‘the significant upward movement in market interest rates’ may drag on the economy amid the ongoing weakness in private sector lending. Indeed, the fresh batch of central bank dragged on the British Pound, with the GBPUSD slipping below the 1.5100 handle, and the sterling continued to lose ground throughout the day as the pair closed at 1.5068.