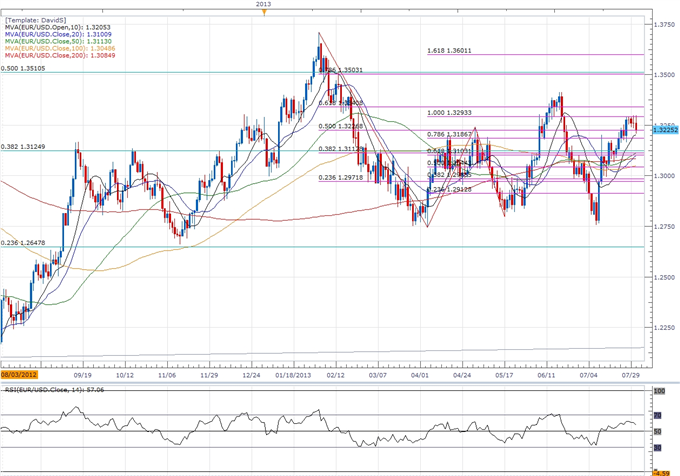 Beyond the Federal Open Market Committee’s (FOMC) interest rate announcement, further details surrounding the exit strategy may heighten the appeal of the U.S. dollar amid the growing discussion at the central bank to taper the asset-purchase program. As the Fed anticipates a stronger recovery in the second-half of the year, the policy statement accompanying the rate decision may sound less dovish this time around, and the central bank may show a greater willingness to move away from its easing cycle as the economy gets on a more sustainable path.

The FOMC may turn increasingly upbeat towards the economy amid the pick up in job growth paired with the resilience in private sector consumption, and we may see a growing number of central bank officials adopt a more hawkish tone for monetary policy as the outlook for growth and inflation improves. However, the FOMC may continue to strike a cautious outlook for the region amid the persistent slack in the real economy, and the central bank may adjust the policy outlook in favor of its highly accommodative stance in order to encourage a stronger recovery.

As the EURUSD remains largely capped by the 1.3300 handle, a more upbeat FOMC may spark a more meaningful reversal in the exchange rate, and we will be watching the downside targets ahead of the highly anticipated Non-Farm Payrolls report due out on Friday as the pair appears to have carved out a near-term top ahead of August. However, we may see a topside break in the EURUSD should the Fed shift its forward-guidance in favor of its highly accommodative policy stance, and the pair may coil up for another run at 1.3400 should the central bank sound more dovish this time around.

Trading the given event risk may not be as clear cut as some of our previous trades as the FOMC is widely expected to maintain its current policy, but further details surrounding the exit strategy may spark a bullish reaction in the U.S. dollar as the central bank appears to be slowly moving away from its easing cycle. Therefore, if the FOMC sounds more upbeat this time around and shows a greater willingness to taper the asset-purchase program, we will need to see a red, five-minute candle following the policy statement to generate a sell entry on two-lots of EURUSD. Once these conditions are fulfilled, we will place the initial stop at the nearby swing high or a reasonable distance from the entry, and this risk will establish our first target. The second objective will be based on discretion, and we will move the stop on the second lot to breakeven once the first trade hits its mark in an effort to preserve our profits.

On the other hand, the Fed may lay out a greater argument to retain its highly accommodative policy amid the ongoing slack in the real economy, and the central bank may keep the door open to shift its asset-purchase program in either direction in an effort to encourage a stronger recovery. As a result, if the FOMC shows a greater willingness to further embark on its easing cycle, we will implement the same strategy for a long euro-dollar trade as the short position laid out above, just in the opposite direction.

The FOMC showed a greater willingness to scale back its asset-purchase program even as the central bank stuck to its current policy in June, and we should see the Fed slowly move away from its easing cycle as they anticipate a stronger recovery in the second-half of the year. Indeed, the more upbeat tone from the FOMC propped up the greenback, with the EURUSD slipping below the 1.3300 handle, and the reserve currency held firm throughout the day as the pair closed at 1.3293.