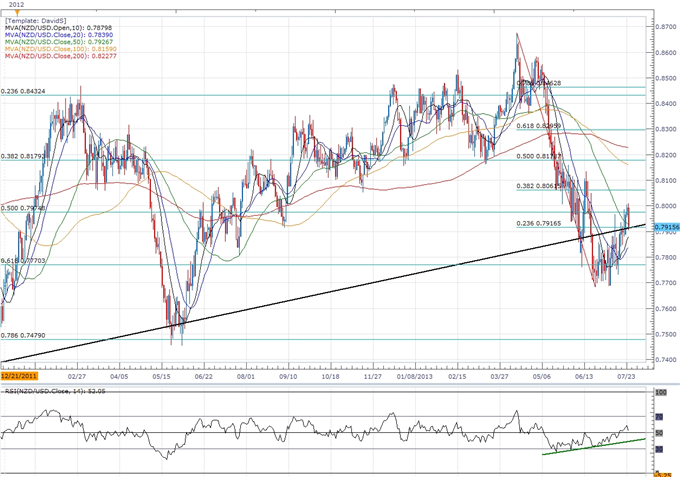 Although the Reserve Bank of New Zealand (RBNZ) is widely anticipated to keep the benchmark interest rate at 2.50% in July, the fresh batch of central bank rhetoric may heighten the appeal of the New Zealand dollar should Governor Graeme Wheeler layout a more hawkish tone for monetary policy. Indeed, the central bank head may highlight a greater risk for an asset bubble as the rebuilding effort from the Christchurch earthquake boosts economic activity, and the RBNZ may show a greater willingness to start normalizing monetary policy as households and businesses continue to take advantage of record-low borrowing costs.

Indeed, rising home prices along with the ongoing expansion in private sector credit may heighten the risk for a housing bubble, and Governor Wheeler may see scope to lift the benchmark interest rate off the record-low in order to balance the risks surrounding the region. However, the RBNZ may continue to endorse its accommodative policy stance amid the ongoing slack in the real economy, and the central bank may reiterate its pledge to keep borrowing costs on hold throughout the remainder of the year in an effort to encourage a stronger recovery.

Despite the bullish divergence in the relative strength index, we’re seeing a fairly muted rebound in the NZDUSD as it struggles to hold above the 0.8000 handle, but the fresh batch of central bank rhetoric may serve as the fundamental catalyst to spark short-term rally in the New Zealand dollar should the RBNZ continue to drop its dovish tone for monetary policy. In turn, we may see a move back above the 50.0% Fibonacci retracement of the 2011 range around 0.7970-80, and the New Zealand dollar may outperform against its major counterparts should we see growing speculation for a rate hike.

Trading the given event risk may not be as clear cut as some of our previous as the RBNZ is widely expected to retain its current policy, but the statement accompanying the rate decision may instill a bullish outlook for the New Zealand dollar should the central bank sound more hawkish this time around. Therefore, if Governor Wheeler shows a greater willingness to lift the cash rate off the record-low, we will need a green, five-minute candle following the announcement to establish a long entry on two-lots of NZDUSD. Once these conditions are fulfilled, we will set the initial stop at the nearby swing low or a reasonable distance from the entry, and this risk will generate our first objective. The second target will be based on discretion, and we will move the stop on the second lot to breakeven once the first trade hits its mark in order to lock-in our gains.

In contrast, the persistent slack in the real economy may encourage the RBNZ to strike a more balanced tone for monetary policy, and we may see market participants scale back bets for higher borrowing costs should the central bank reiterate its pledge to keep the benchmark interest rate on hold throughout 2013. As a result, if Mr. Wheeler sounds more dovish this time around, we will implement the same strategy for a short kiwi-dollar trade as the long position laid out above, just in the opposite direction.

The Reserve Bank of New Zealand pledged to keep the benchmark interest rate at 2.50% throughout 2013 as Governor Graeme Wheeler warned that the ‘New Zealand dollar remains overvalued and continues to be a headwind for the tradables sector,’ and it seems as though the central bank will retain a wait-and-see approach over the near to medium-term in an effort to encourage a stronger recovery. Indeed, the cautious tone struck by the RBNZ dragged on the New Zealand dollar, with the NZDUSD slipping back below the 0.7950 region, but the higher-yielding currency regained its footing during the day as the pair closed at 0.8095.