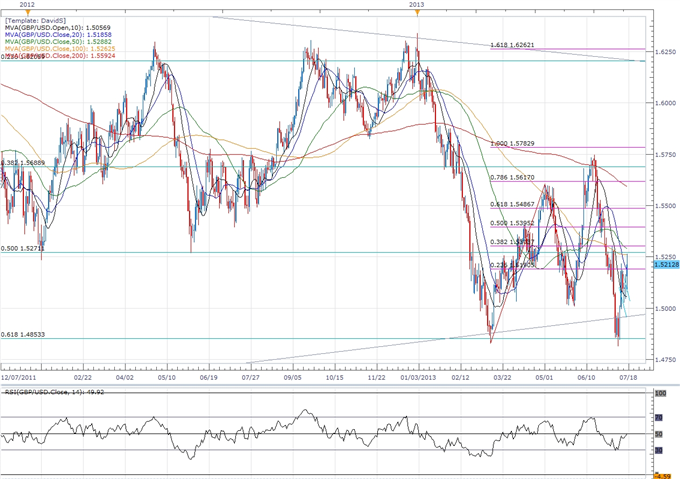 U.K. Retail Sales are projected to increase another 0.2% in June and the ongoing improvement in private sector consumption should help to produce a more meaningful rebound in the British Pound as it dampens the Bank of England’s (BoE) scope to further embark on its easing cycle. As the BoE now votes unanimously to retain its current policy, it seems as though the central bank is slowly moving away from its easing cycle, and we may see the Monetary Policy Committee start to lay out a more detailed exit strategy over the coming months as the outlook for growth and inflation improves.

The ongoing improvement in the labor market paired with the uptick in wage growth may encourage U.K. households to increase their rate of consumption, and a positive print may further the case for the BoE to keep its asset-purchase program capped at GBP 375B as they see a slow but sustainable recovery in Britain. However, sticky inflation along with the weakness in consumer confidence may drag on retail sales, and a dismal print may dampen the appeal of the sterling as the central bank looks to implement a ‘mixed strategy’ in addressing the risks surrounding the region.

Although the GBPUSD struggled to clear the 50.0% Fibonacci retracement from the 2009 range (1.5270) following the BoE Minutes, we may see a topside break on a positive retail sales report, and the rebound from 1.4812 may gather pace in the days ahead as it builds a short-term base in July. However, we may see the British Pound consolidate over the remainder of the week should the data fuel speculation for more quantitative easing, and the sterling may face range-bound prices over the near-term as market participants weigh the outlook for monetary policy.

Forecasts for another uptick in household spending certainly instills a bullish outlook for the sterling, and a positive development may set the stage for a long British Pound trade as it raises the scope for a stronger recovery. Therefore, if retail sales increases 0.2% or greater in June, we will need a green, five-minute candle following the release to generate a buy entry on two-lots of GBPUSD. Once these conditions are met, we will set the initial stop at the nearby swing low or a reasonable distance from the entry, and this risk will establish our first objective. The second target will be based on discretion, and we will move the stop on the second-lot to cost once the first trade hits its mark in order to preserve our profits.

In contrast, the persistent slack in the real economy along with sticky price growth may drag on consumption, and a dismal print may dampen the appeal of the sterling as the BoE holds a relatively cautious tone for the U.K. economy. As a result, if the sales report disappoints, we will carry out the same setup for a short pound-dollar trade as the short position laid out above, just in the opposite direction.

Impact that the U.K. Retail Sales report has had on GBP during the last month

Household spending in the U.K. jumped 2.1% during June after contracting a revised 1.2% the month prior, led by a 4.3% rise in online sales, with gasoline receipts climbed 1.7% during the same period. Indeed, the better-than-expected print propped up the British Pound, with the GBPUSD climbing above the 1.5475 region, and the sterling continued to gain ground throughout the day as the pair closed at 1.5506.