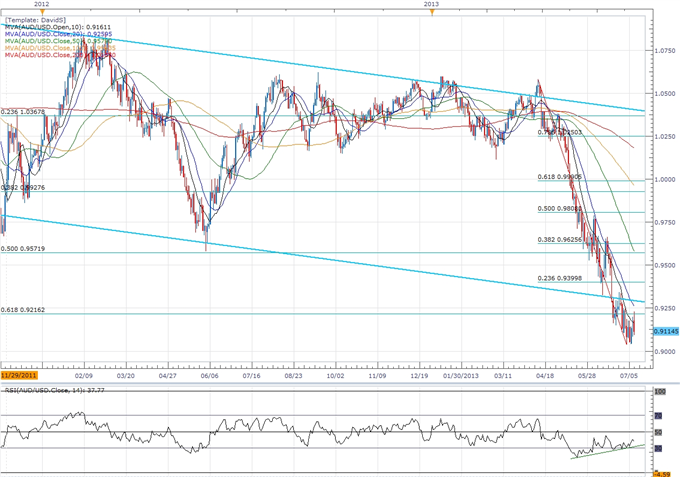 After adding 1.1K jobs in May, Australia employment is expected to hold flat in June, and a dismal development may drag on the AUDUSD as it fuels speculation for additional monetary support. As the Reserve Bank of Australia (RBA) keeps the door open to push the benchmark interest rate to a fresh record-low, the slowing recovery in the $1T economy may prompt the central bank to further embark on its easing cycle, and we may see the Australian dollar face additional headwinds over the near to medium-term as China – Australia’s largest trading partner – remains at risk for a hard-landing.

The recent pickup in global trade along with the rebound in business sentiment may lead to a marked improvement in the labor market, and a positive print may heighten the appeal of the higher-yielding currency as it dampens the RBA’s scope to deliver another rate cut. However, the ongoing slack in the real economy along withthe slowdown in private consumption may continue to drag on employment, and RBA Governor Glenn Stevens may show a greater willingness to further embark on the easing cycle in the second-half of the year in order to encourage a stronger recovery.

The Australian dollar looks poised for a larger correction amid the bullish divergence in the relative strength index, and a positive print may serve as the fundamental catalyst to spur a move back above the 61.8% Fibonacci retracement from the 2010 low to high around 0.9210-20 should the data sap bets for additional monetary support. However, a dismal print may generate a more meaningful run at the 0.9000 figure, and we may see the Australian dollar face additional headwinds over the near to medium-term as the RBA looks poised to further embark on its easing cycle.

Trading the given event risk may not be as clear cut as some of our previous trades amid forecasts for a flat print, but a positive development may pave the way for a long Australian dollar trade as it drags on expectations for lower borrowing. Therefore, if employment exceeds market expectations, we will need a green, five-minute candle following the release to generate a long trade on two-lots of AUDUSD. Once these conditions are fulfilled, we will set the initial stop at the nearby swing low or a reasonable distance from the entry, and this risk will establish our first objective. The second target will be based on discretion, and we will move the stop on the second lot to breakeven once the first trade hits its mark in an effort to preserve our profits.

In contrast, the persistent slack in private sector activity may drag on hiring, and a dismal jobs report should dampen the appeal of the higher-yielding as it fuels bets for another rate cut. As a result, if Australia employment disappoints, we will carry out the same setup for a short aussie-dollar trade as the long position laid out above, just in reverse.

The Australian economy added another 1.1K jobs in May following the revised 45.0K expansion the month prior, while the jobless rate unexpectedly narrowed to 5.5% from 5.6% as discouraged workers left the labor force. Indeed, the second consecutive rise in employment propped up the Australian dollar, with the AUDUSD moving above the 0.9500 figure, and the higher-yielding currency continued to gain ground throughout the day as the pair closed at 0.9638.