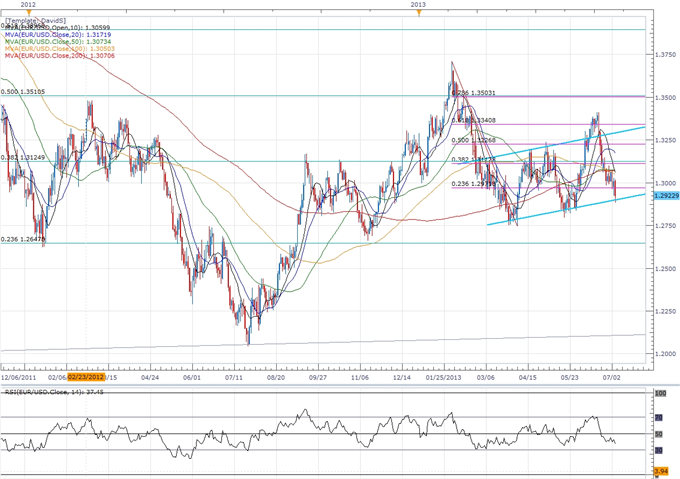 U.S. Non-Farm Payrolls are projected to increase another 165K in June and the ongoing improvement in the labor market should heighten the appeal of the USD as it dampens the Fed’s scope to retain its highly accommodative policy stance. As the world’s largest economy gets on a more sustainable path, it looks as though tapering the asset-purchase program will be a growing discussion at the Federal Reserve, and the FOMC remains poised to switch gears later this year as the committee anticipates a stronger recovery in the second-half of 2013.

As the Fed continues to highlight the resilience in private sector consumption, the persistent strength in household spending may prompt U.S. firms to expand their labor force, and a positive development should spark a near-term rally in the dollar as it raises the outlook for growth. However, the slowdown in service-based activity along with lower rate of production may drag on hiring, and we may see the Fed retain its quantitative easing program throughout 2013 in an effort to encourage a stronger recovery.

Despite the marked selloff following the European Central Bank interest rate decision, we’re seeing the EURUSD preserve the upward trend from earlier this year, but the euro-dollar may continue to give back the rebound from back in April (1.2743) should the Non-Farm Payrolls report present further arguments to taper the Fed’s quantitative easing program. However, a dismal updated on the labor market may dampen the appeal of the reserve currency, and the near-term rebound in the EURUSD may continue to gather pace over the next 24-hours of trading should the data fall short of market expectations.

Indeed, forecasts for another 165K rise in Non-Farm Payrolls highlights a bullish outlook for the reserve currency, and the market reaction may pave the way for a long U.S. dollar trade as it increases the scope of seeing the Fed scale back on QE. Therefore, if NFPs top market expectations, we will need a red, five-minute candle following the release to generate a sell entry on two-lots of EURUSD. Once these conditions are fulfilled, we will set the initial stop at the nearby swing high or a reasonable distance from the entry, and this risk will establish our first target. The second objective will be based on discretion, and we will move the stop on the second lot to cost once the first trade hits its mark in order to preserve our profits.

In contrast, the ongoing slack in the real economy may continue to drag on employment, and a dismal print may dampen the appeal of the greenback as it fuels speculation for additional monetary support. As a result, if the labor data disappoints, we will carry out the same trade setup for a long euro-dollar trade as the short position mentioned above, just in the opposite direction.

The U.S. economy added another 175K jobs in May following a revised 149K rise the month prior, while the jobless rate widened to an annualized 7.6% from 7.5% as discouraged workers returned to the labor force. Despite the mixed reaction immediately following the release, we saw the greenback gain ground throughout the North American trade, with the EURUSD ending the day at 1.3211.