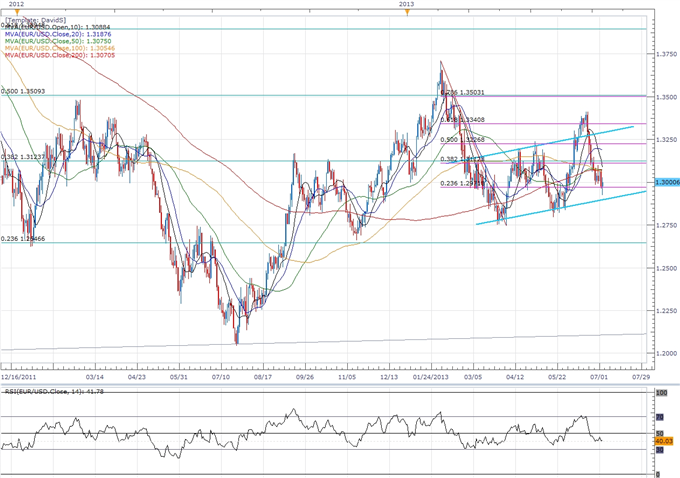 The European Central Bank (ECB) interest rate decision may have a limited impact on the Euro as the central bank is widely expected to retain its current policy in July, but the policy statement may drag on the single currency should the Governing Council look to implement more non-standard measures in the second-half of the year. As the region struggles to return to growth, we may see a growing number of ECB officials turn increasingly cautious towards the economy, and President Mario Draghi may sound more dovish this time around as the governments operating under the fixes-exchange become increasingly reliant on monetary support.

The stickiness in price growth along with ongoing improvement in confidence may encourage the ECB to strike an improved outlook for the region, and a more upbeat policy statement may spark a near-term rally in the Euro as market participants scale back bets for additional monetary support. However, record-high unemployment paired with the persistent weakness in private sector consumption may continue to damp the outlook for growth and inflation, and the ECB may adopt a more dovish tone for monetary policy as the region faces a prolonged recession.

As the EURUSD fails to preserve the range-bound price action carried over from the previous week, the EURUSD may threaten the upward on a more dovish ECB, and the single currency remains poised to face additional headwinds over the near-term as the governments operating under the fixed-exchange rate system become increasingly reliant on monetary support. However, we may see a relief rally take shape should Mr. Draghi strike an improved outlook for the region, and the central bank may stick to the sidelines throughout the remainder of the 2013 as the region is expected to return to growth later this year.

Trading the given event risk may not be as clear cut as some of our previous trades as the ECB sticks to its current policy, but the fresh batch of central bank rhetoric may set the stage for a long Euro trade should the Governing Council strike an improved outlook for the euro-area. Therefore, if President Draghi sounds more upbeat and talks down bets for more easing, we will need to see a green, five-minute candle following the statement to establish a long entry on two-lots of EURUSD. Once these conditions are fulfilled, we will set the initial stop at the nearby swing low or a reasonable distance from the entry, and this risk will generate our first target. The second objective will be based on discretion, and we will move the stop on the second lot to cost once the first trade hits its mark in an effort to lock-in our gains.

On the other hand, the Governing Council may turn increasingly cautious towards the economy as the region struggles to return to growth, and we may see a growing number of ECB officials show a greater willingness to ease policy further in order to pull the region out of recession. As a result, if Mr. Draghi sees scope to introduce more non-standard measures in the second-half of the year, we will implement the same setup for a short euro-dollar trade as the long position laid out above, just in the opposite direction.

Indeed, the European Central Bank kept the benchmark interest rate at 0.50% in June as the Governing Council sees the euro-area returning to growth later this year, and it seems as though the central bank will stick to the sidelines for the time being as inflation expectations remain ‘firmly anchored. Indeed, the more upbeat tone struck by President Mario Draghi propped up the Euro, with the EURUSD climbing above the 1.3050 region, and the single currency continued to appreciate throughout the day as the pair closed at 1.3244.