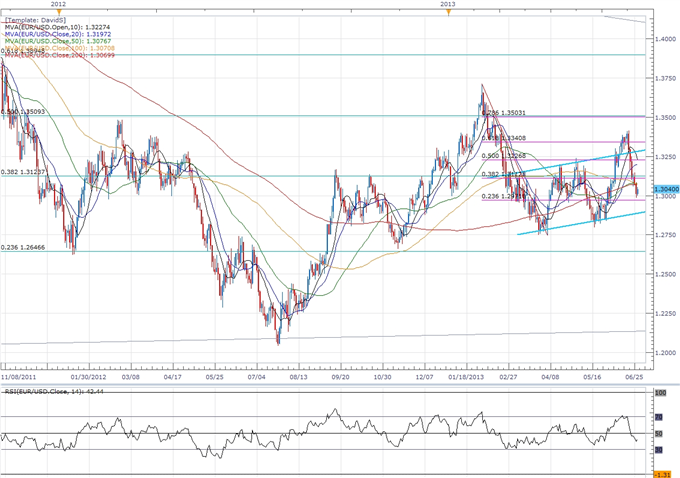 German retail sales are projected to increase 0.4% in May and the rebound in private sector consumption may prop up the Euro as it raises the outlook for growth. As the European Central Bank (ECB) anticipates the euro-area to return to growth later this year, a positive development may limit the Governing Council’s scope to implement more non-standard, and the group may retain its current policy at the July 4 meeting as President Mario Draghi strikes a more neutral tone for monetary policy.

The downtick in unemployment along with the rise in consumer confidence certainly bodes well for retail sales, and a strong rebound may heighten the appeal of the single currency as it saps bets for additional ECB support. However, stick price growth paired with the persistent slack in the real economy may continue to drag on household spending, and a dismal development may drag on the exchange rate as it dampens the prospects for a strong recovery in the euro-area.

The short-term rebound in the EURUSD may gather pace should the German retail sales report instill an improved outlook for the euro-area, but the pair may struggle to hold above the 23.6% Fibonacci retracement around the 1.2970 region should the data fall short of market expectations. However, as we head into the second day of the EU Summit, we may see a muted reaction to the sales figure, and headlines coming out of the meeting may have a greater impact on the exchange rate as the EU looks to utilize the European Stability Mechanism (ESM) to shore up its banking sector.

Forecasts for a rebound in German retail sales instills a bullish outlook for the single currency, and the market reaction may pave the way for a long Euro trade as it raises the outlook for growth. As a result, if spending increases 0.4% or more in May, we will need a green, five-minute candle following the release to generate a long entry on two-lots of EURUSD. Once these conditions are fulfilled, we will set the initial stop at the nearby swing low or a reasonable distance from the entry, and this risk will establish our first objective. The second target will be based on discretion, and we will move the stop on the second lot to cost once the first trade hits its mark in an effort to protect our gains.

On the other hand, sticky price growth paired with the persistent slack in the real economy may continue to hurt consumption, and a dismal print may dampen the appeal of the single currency as it fuels speculation for additional monetary support. As a result, if the sales report falls short of market expectations, we will carry out the same setup for a short euro-dollar trade as the long position laid out above, just in the opposite direction.

Household spending in Germany slipped another 0.4% during April, led by a 5.0% decline in demands for inflation technology, while sales of pharmaceuticals and cosmetics fell 4.4% during the same period. Despite the dismal print, the EURUSD held steady following the release, but the single currency struggled to hold its ground throughout the day as it closed at 1.2994.