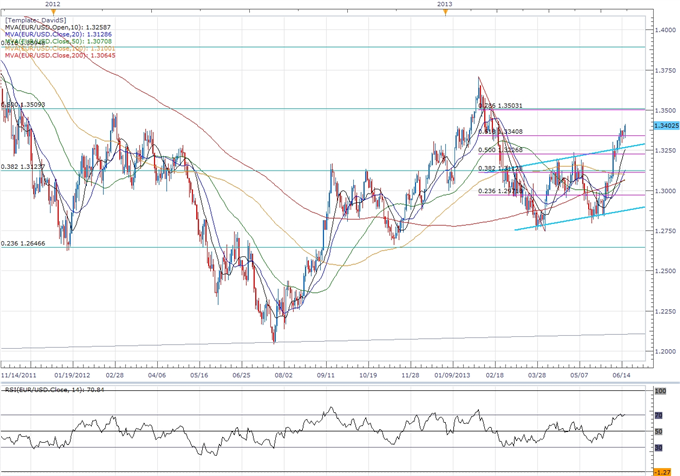 Although the Federal Open Market Committee (FOMC) is widely anticipated to preserve its highly accommodative policy stance in June, the fresh batch of central bank rhetoric along with the updated forecast may increase the appeal of the USD should we see a growing argument to taper the asset-purchase program. Indeed, it seems as though the FOMC is slowly moving away from its easing cycle as the U.S. economy gets on a more sustainable path, and the central bank may start to lay out a more detailed exit strategy as the committee sees a stronger recovery in the second-half of the year.

The resilience in private sector consumption along with the ongoing improvements in the labor market may prompt the FOMC to drop its dovish tone for monetary policy, and we may see a growing number of central bank officials look to halt the easing cycle as the economic recovery gradually gathers pace. However, subdued wage growth paired with the slowdown in private sector credit may encourage the FOMC to further expand the balance sheet, and the central bank may keep the door open to expand its quantitative easing program beyond the $85 monthly limit in order to stem the downside risks surrounding the region.

The EURUSD looks poised for a correction as the relative strength index continues to flirt with overbought territory, and the FOMC interest rate decision may serve as the fundamental catalyst to spark a short-term reversal in the exchange rate should the central bank show a greater willingness to scale back its asset-purchase program. However, a more dovish Fed is likely to dampen the appeal of the USD, and we may see the rate decision trigger a run at the 78.6% Fibonacci retracement (1.3500) from the February decline should the committee keep the door open to expand its asset-purchase program beyond the $85B monthly limit.

Trading the given event risk may not be as clear cut as some of our previous trades as the FOMC preserves its current policy, but a further shift in the policy outlook may spark a bullish reaction in the U.S. dollar as market participants scale back bets for more quantitative easing. Therefore, if the FOMC strikes a more hawkish tone for monetary policy and looks to taper the asset-purchase program, we will need a red, five-minute candle following the policy statement to establish a sell entry on two-lots of EURUSD. Once these conditions are fulfilled, we will place the initial stop at the nearby swing high or a reasonable distance from the entry, and this risk will generate our first target. The second objective will be based on discretion, and we will move the stop on the second lot to breakeven once the first trade hits its mark in order to preserve our profits.

In contrast, the Fed may retain a cautious tone amid the ongoing slack in the real economy, and the central bank may keep the door open to expand the balance sheet further in an effort to encourage a stronger recovery. As a result, if the FOMC shows a greater willingness to further embark on its easing cycle, we will carry out the same setup for a long euro-dollar trade as the short position laid out above, just in the opposite direction.

Although The FOMC stuck to its current policy in May, the central bank stated that ‘the committee is prepared to increase or reduce the pace’ of its asset-purchase program as it responds to incoming data, and went onto say that it will retain a highly accommodative policy stance ‘until the outlook for the labor market has improved substantially.’ Indeed, the dollar struggled to hold its ground following the mixed tone, with the EURUSD climbing above the 1.3200 handle, but the greenback regained its footing during the North American trade to end the day at 1.3178.