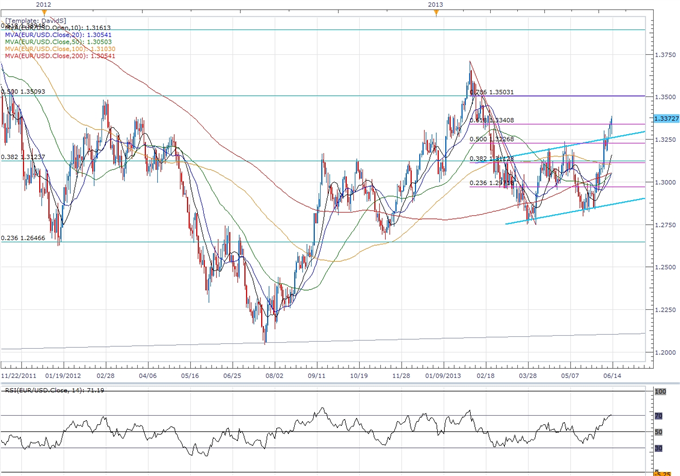 EUR/USD- Trading the U. of Michigan Confidence Survey

The U. of Michigan Confidence survey is expected to hold at a five-year high in May, but another uptick in household sentiment may further dampen the Fed’s scope to expand the balance sheet further as growth prospects improve. Should the data raise the outlook for private sector consumption – one of the leading drives of growth – the print may fuel a near-term correction in the U.S. dollar, and we may see a growing number of central bank officials look to taper the asset-purchase program as the world’s largest economy gets on a more sustainable path.

The resilience in household spending along with the ongoing improvement in the labor market may ultimately lead to another uptick in the U. of Michigan survey, and a positive development may increase the appeal of the USD as it puts increase pressure on the FOMC to move away from its easing cycle. However, subdued wage growth paired with the slowdown in private lending may drag on household confidence, and a sharp decline in the headline figure may drag on the exchange rate as it gives the Fed increased room to retain its highly accommodative policy stance.

As the relative strength index comes up against overbought territory, the EURUSD may continue to trade below the 1.3400 handle, and a positive U. of Michigan survey may serve as the fundamental catalyst to prompt a selloff in the exchange rate as the fundamental outlook for the U.S. improves. However, as the 78.6% Fibonacci retracement from the February decline lines up with the 50.0% retracement from the 2009 high to the 2010 low around 1.3500, we may see a test of the key figure should the data print fall short of market forecast.

Trading the given event risk may not be as clear cut as our previous trades as the print is expected to hold steady in May, but an upbeat print may set the stage for a long U.S. dollar trade as it curbs bets for additional Fed support. Therefore, if the U. of Michigan survey tops market expectations, we will need to see a red, five-minute candle following the release to generate a sell entry on two-lots of EURUSD. Once these conditions are fulfilled, we will place the initial stop at the nearby swing high or a reasonable distance from the entry, and this risk will establish our first objective. The second target will be based on discretion, and we will move the stop on the second lot to breakeven once the first trade hits its mark in order to lock-in our gains.

On the other hand, slower wage growth paired with the ongoing slack in the real economy may drag on household confidence, and an unexpected downtick in the survey may drag on the greenback as it weakens the outlook for growth. As a result, if the survey disappoints, we will implement the same strategy for a long euro-dollar trade as the short position mentioned out above, but in the opposite direction.

May 2013 U. of Michigan Confidence

U.S. consumer sentiment jumped higher in June, with the U. of Michigan survey advancing to 83.7 to mark the highest reading since July 2007, while inflation expectations for the next 12-months held steady at 3.1% for the second month. Despite the better-than-expected print, the dollar failed to benefit from the positive print as the EURUSD climbed back above the 1.2800 handle, and the reserve currency struggled to hold its ground throughout the North American trade as the pair closed at 1.2833.