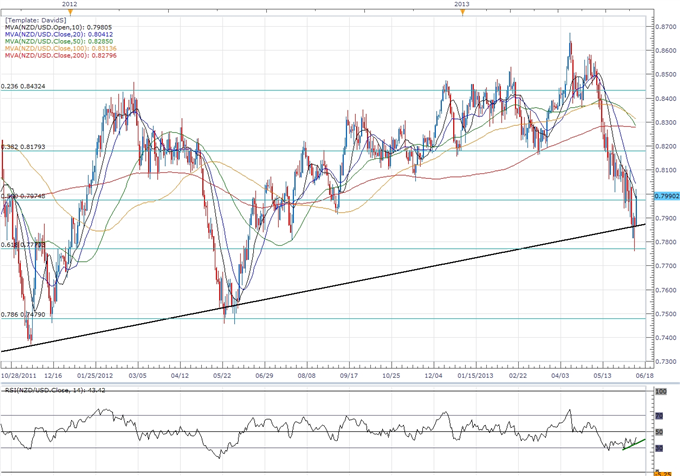 Although the Reserve Bank of New Zealand (RBNZ) is widely expected to keep the benchmark interest rate at 2.50% in June, the statement accompanying the rate decision may heighten the appeal of the New Zealand dollar should Governor Graeme Wheeler adopt a more hawkish tone for monetary policy. Indeed, the central bank head may continue to highlight the risk of an asset bubble as the rebuilding effort from the Christchurch earthquake is expected to boost economic activity, and the RBNZ may see scope to start normalizing monetary policy in the second-half of the year as recovery gathers pace.

Rising home prices paired with the marked pickup in the labor market may fuel increased concerns for an asset bubble, and Governor Wheeler may see scope to lift the benchmark interest rate off the record-low in order to balance the risks surrounding the region. However, the slowdown in private sector consumption along with the easing trade conditions may prompt the RBNZ to strike a more neutral tone for monetary policy, and the central bank may retain its current policy throughout 2013 in order to address the persistent slack in the real economy.

As the NZDUSD comes off of the 61.8% Fibonacci retracement from the 2011 low to high around 0.7770, a more hawkish statement from the RBNZ may pave the way for a move back towards the 38.2% retracement (0.8180), and we may see the pair retain the upward trend dating back to 2010 should the central bank show a greater willingness to start normalizing monetary policy in the second-half of the year. However, a further pledge to retain the wait-and-see approach may dampen the appeal of the higher-yielding currency, and the fresh batch of central bank rhetoric may produce another test of the 61.8% Fib should Governor Wheeler sound more dovish this time around.

Trading the given event risk may not be as clear cut as some of our previous as the RBNZ is widely expected to keep the benchmark interest rate on hold, but the fresh batch of central bank rhetoric may instill a bullish outlook for the New Zealand dollar should the central bank sound more hawkish this time around. Therefore, if Governor Wheeler shows a greater willingness to start normalizing monetary policy in the second-half of the year, we will need to see a green, five-minute candle following the event to establish a long entry on two-lots of NZDUSD. Once these conditions are met, we will set the initial stop at the nearby swing low or a reasonable distance from the entry, and this risk will generate our first objective. The second target will be based on discretion, and we will move the stop on the second lot to breakeven once the first trade hits its mark in an effort to lock-in our gains.

In contrast, the ongoing slack in the real economy may encourage the RBNZ to strike a more balanced tone for monetary policy, and speculation for a neutral policy stance may drag on the exchange rate as market participants scale back bets for higher borrowing costs. As a result, if the central bank shows a greater willingness to keep the cash rate at 2.50% throughout 2013, we will implement the same setup for a short kiwi-dollar trade as the long position laid out above, just in reverse.

Although the Reserve Bank of New Zealand kept the benchmark interest rate at 2.50%, Governor Graeme Wheeler struck a rather upbeat tone as the recovery picks up, and went onto say that ‘the bank does not want to see financial or price stability compromised by housing demand getting too far ahead of supply’ as the record-low interest rate raises the risk for an asset bubble. Indeed, the New Zealand dollar surged higher following the remarks, with the NZDUSD climbing towards the 0.8450 figure, and the higher-yielding currency gained ground throughout the day as the pair closed at 0.8474.