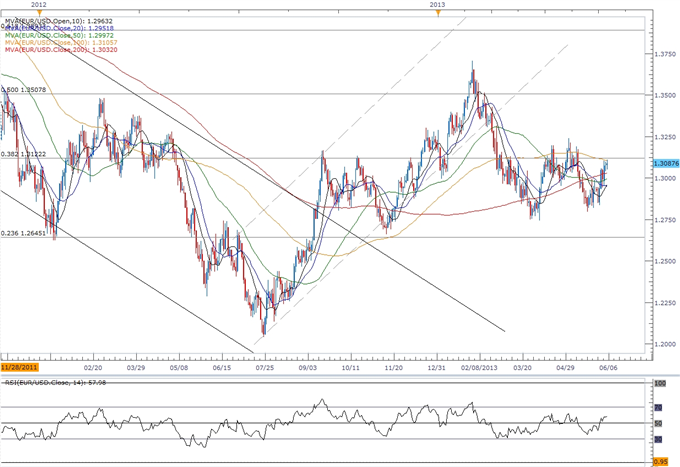 Although the European Central Bank (ECB) is widely expected to keep the benchmark interest rate at 0.50% in June, the Governing Council may show a greater willingness to further embark on its easing cycle as the region struggles to emerge from the recession. As the persistent weakness in the euro-area threatens price stability, ECB President Mario Draghi may look to purchase Asset-Backed Securities (ABS) in the second-half of the year, but we may also see a greater discussion for a negative interest-rate policy (NIRP) as the governments operating under the single currency become increasingly reliant on monetary support.

Sticky price growth along with the pickup in global trade may prompt the ECB to soften its dovish tone for monetary policy, and the central bank may endorse a neutral policy stance for the second-half of the year as the region is expected to return to growth towards the end of 2013. However, record-high unemployment paired with the ongoing weakness in private sector consumption may spark a greater discussion for additional monetary support, and the ECB may implement more non-standard measures in the coming months to address the risks surrounding the region.

As the EURUSD continues to carve a lower top just below the 38.2% Fibonacci retracement from the 2009 high to the 2010 low around 1.3120, the ECB interest rate decision may serve as the fundamental catalyst to put the head-and-shoulders formation into play, and we may see the central bank implement a range of policy tools in the second-half of the year in order to steer the region out of recession. However, a less dovish ECB may spark another run at the 1.3200 handle, and we may see a bullish formation take shape should President Draghi talk down speculation for additional monetary support.

Trading the given event risk may not be as clear cut as some of our previous trades as the ECB preserves its current policy, but the fresh batch of central bank rhetoric may pave the way for a long Euro trade should the Governing Council raise its fundamental outlook for the euro-area. Therefore, if President Draghi strikes a more neutral tone for monetary policy and talks down bets for more easing, we will need a green, five-minute candle following the statement to generate a buy entry on two-lots of EURUSD. Once these conditions are fulfilled, we will set the initial stop at the nearby swing low or a reasonable distance from the entry, and this risk will establish our first objective. The second target will be based on discretion, and we will move the stop on the second lot to cost once the first trade hits its mark in an effort to secure our profits.

In contrast, the Governing Council may turn increasingly cautious towards the economy as the region remains mired in recession, and we may see a growing number of ECB officials show a greater willingness to ease policy further in order to stem the downside risks for growth and inflation. As a result, if Mr. Draghi pledges to introduce more non-standard measures in the second-half of the year, we will carry out the same strategy for a short euro-dollar trade as the long position mentioned above, just in the opposite direction.

The European Central Bank pushed the benchmark interest rate to a fresh-record low of 0.50% in May in an effort to steer the region out of recession, but the Governing Council may have little choice but to carry its easing cycle into the second-half of the year as the governments operating under the single currency become increasingly reliant on monetary support. Despite the initial bounce in the EURUSD, the pair struggled to hold above the 1.3200 handle as ECB President Mario Draghi struck a dovish tone for monetary policy, and the euro continued to lose ground throughout the North American trade as the pair ended the day at 1.3063.