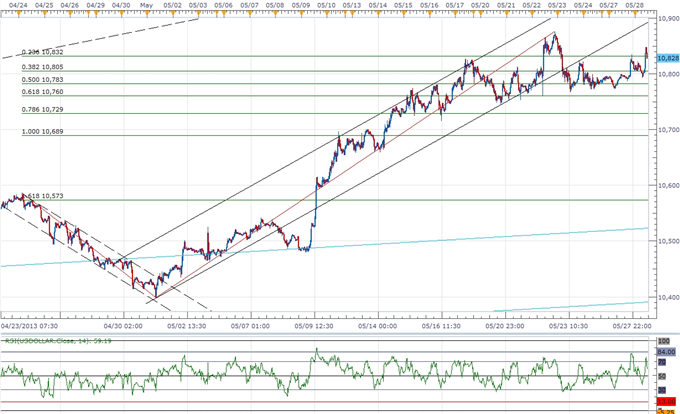 The Dow Jones-FXCM U.S. Dollar Index (Ticker: USDollar) is trading 0.32 percent higher on the day after the U.S. Consumer Confidence survey and the Richmond Fed Manufacturing report beat market expectations, and the bullish sentiment surrounding the greenback may gather pace in the days ahead as the fundamental outlook for the world’s largest economy improves. As the dollar appears to be carving out a higher low during the final days of May, we may see another run at the 10,900 ahead of the next FOMC interest rate decision on June 19, and the shift in the policy outlook should prop up the dollar over the near to medium-term as market participants scale back bets for more monetary support. Although the dollar cleared the 23.6 percent Fibonacci expansion around 10,832, we’re seeing the 30-minute relative strength index fall back from a high of 73, and we may see the dollar consolidate over the next 24-hours of trading as the market reaction tapers off. 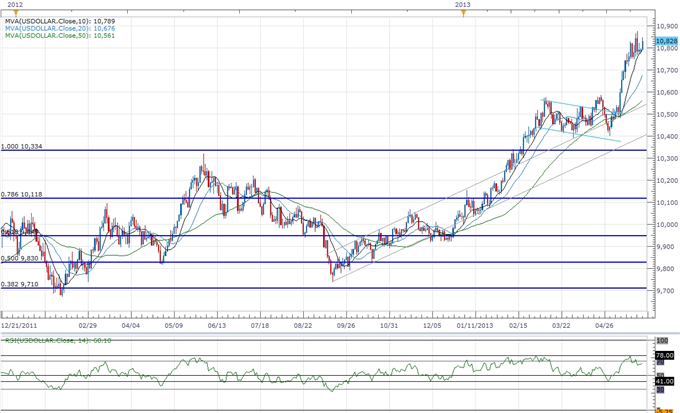 Indeed, the daily chart calls for an more meaningful correction in the USDOLLAR as the relative strength index comes off of resistance (78), but we may see a shallow pullback in the index as a growing number of Fed officials see scope to taper the asset purchase program in the coming months. As Moody’s Investor Services raises its outlook for the U.S. banking system to stable from negative, we may see a greater discussion to halt the easing cycle towards the end of the year, and the central bank may start to lay out a more detailed exit strategy in the second-half of 2013 as the recovery gradually gathers pace. In turn, we will continue to look for a higher low in the USDOLLAR, and will look to buy dips in the index as the interest rate outlook starts to pick up.

Three of the four components weakened against the greenback, led by a 1.10 percent decline in the Japanese Yen, while the Australian dollar bucked the trend as the AUDUSD climbed 0.12 percent. The aussie-dollar looks poised for a near-term correction as the relative strength index bounces back from a low of 19, but we may see the pair continue to consolidate above the 0.9600 figure as the oscillator struggles to push above the 30 figure. Nevertheless, as Credit Suisse overnight index swaps continue to show expectations for another 25bp rate cut from the Reserve Bank of Australia (RBA), we will maintain a bearish outlook on a longer-term scale, and the downward trend dating back to 2011 should persistently take shape in the coming months as Governor Glenn Stevens retains a dovish tone for monetary policy. In turn, we will wait for the correction to sell the AUDUSD, but we may see a fresh low before the bounce should the fundamental developments coming out of the $1T economy disappoint.