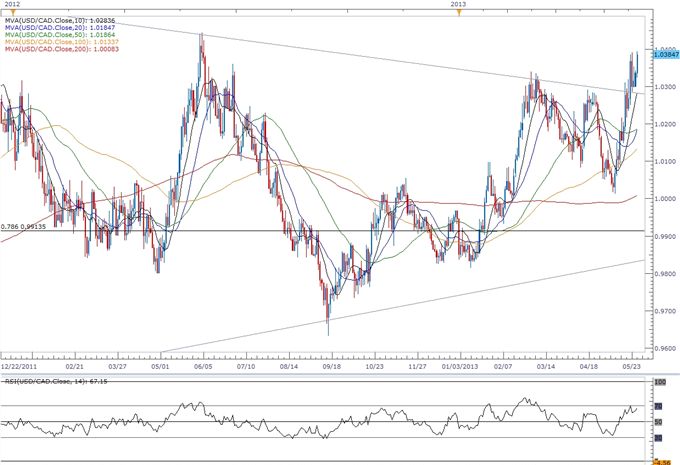 Although the Bank of Canada (BoC) is widely expected to keep the benchmark interest rate at 1.00% in May, the fresh batch of central bank rhetoric accompanying the rate decision may dampen the appeal of the Canadian dollar should Governor Mark Carney adopt a more dovish tone for monetary policy. As Canada faces a slowing recovery, the BoC may scale back its willingness to deliver a rate hike, and the central bank remains poised to carry its wait-and-see approach into the second-half of the year in an effort to stem the downside risks for growth and inflation.

As rising home prices paired with the expansion in private sector lending raises the threat of an asset bubble, Governor Carney has persistently talked up bets for a rate hike, and the central bank head may show a greater willingness to normalize monetary policy as the fundamental outlook for the United States – Canada’s largest trading partner – improves. However, the slowdown in retail sales along with the ongoing slack in the real economy may prompt the BoC to adopt a more dovish tone for monetary policy, and the central bank may scale back its willingness to raise the benchmark interest rate in order to encourage a stronger recovery.

Although the USDCAD appears to be breaking out of the consolidation phase dating back to 2011, the pair could be carving out a near-term top ahead of the BoC rate decision as it struggles to clear the 1.0400 handle. Nevertheless, the deviation in the policy outlook may produce further advances in the exchange rate as the Federal Reserve appears to be slowly moving away from its easing cycle, and the Canadian dollar may weaken further in the second-half of the year as Governor Carney warns of a slowing recovery.

As the BoC retains its current policy stance, we will be closely watching the statement accompanying the rate decision, and the fresh batch of central bank rhetoric may set the stage for a long Canadian dollar trade amid bets for higher borrowing costs. Therefore, if Governor Carney sees a greater case to raise the benchmark interest rate from 1.00%, we will need to see a red, five-minute candle following the announcement to generate a sell entry on two-lots of USDCAD. Once these conditions are met, we will set the initial stop at the nearby swing high or a reasonable distance from the entry, and this risk will establish our first objective. The second target will be based on discretion, and we will move the stop on the second lot to breakeven once the first trade hits its mark in order to lock-in our gains.

On the other hand, the slowdown in household spending paired with the renewed slack in private sector activity may lead the BoC to carry a wait-and-see approach in the second-half of the year, and we may see Governor Carney sound more dovish this time around as the fundamental outlook for the region deteriorates. As a result, if the central bank head see limited scope for a rate hike, we will carry out the same setup for a long dollar-loonie trade as the short position mentioned above, just in the opposite direction.

Although the Bank of Canada kept the door open to raise the benchmark interest rate from1.00%, Governor Mark Carney struck a rather cautious tone for the region and warned that ‘a material degree of slack has re-emerged in the Canadian economy.’ The rather dovish tone for monetary policy dragged on the Canadian dollar, with the USDCAD pushing back towards parity, but the market reaction failed to gather momentum as the pair ended the day at 1.0263.