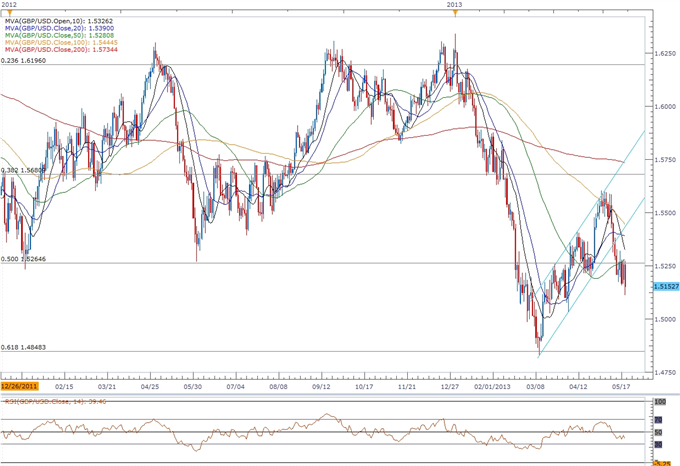 The Bank of England (BoE) Minutes may prop up the British Pound as the central bank appears to be slowly moving away from its easing cycle, and the fresh batch of central bank rhetoric may instill a bullish outlook for the sterling should the Monetary Policy Committee talk down bets for more quantitative easing. Although we anticipate to see another 6-3 split within the committee, the BoE may keep the Asset Purchase Facility capped at GBP 375B as it extends the Funding for Lending Scheme by another 12-months, and the policy statement may sound more hawkish this time around as the central bank sees a ‘modest’ recovery in the U.K.

As the U.K. skirts a triple-dip recession, the ongoing improvement in the labor market along with the expansion in private sector credit may encourage the BoE to strike a more neutral to hawkish tone for monetary policy, and the central bank may sap bets for more QE as the economic recovery slowly picks up. However, easing price pressures along with the slowdown in private sector consumption may push the central bank to adopt a cautious outlook for the region, and the MPC may keep the door open to expand the balance sheet further in an effort to stem the downside risks for the U.K. economy.

As the British Pound struggles to hold above the 50.0% Fibonacci retracement from the 2009 low to high around 1.5260, we may see the GBPUSD give back the rebound from March (1.4830), but the BoE Minutes may serve as the fundamental catalyst to spark a near-term rally in the pair as market participants weigh the prospects for future policy. Indeed, we would need a material shift in the policy outlook to see the pound-dollar carve out a higher low in May, and we may see another run at the 38.2% retracement (1.6190-1.6200) should we see a growing number of BoE officials scale back their willingness to further embark on quantitative easing.

Trading the BoE Minutes may not be as clear cut as some of our previous trades, but a more hawkish rhetoric from the BoE may pave the way for a long British Pound trade as market participants scale back bets for additional monetary support. Therefore, if the MPC talks down bets for more QE, we will need to see a green, five-minute candle following the release to establish a long entry on two-lots of GBPUSD. Once these conditions are fulfilled, we will place the initial stop at the nearby swing low or a reasonable distance from the entry, and this risk will generate our first objective. The second target will be based on discretion, and we will move the stop on the second lot to breakeven once the first trade hits its mark in order to preserve our profits.

On the other hand, the BoE may keep the door open to expand its balance sheet further amid the persistent slack in the real economy, and the central bank may preserve a highly accommodative policy stance over the near to medium-term in an effort to get the economy on a more sustainable path. As a result, if the committee shows a greater willingness to expand the balance sheet further, we will implement the same strategy for a short pound-dollar trade as the long position mentioned above, just in the opposite direction.

The Bank of England (BoE) Minutes showed another 6-3 split within the Monetary Policy Committee, with Governor King, David Miles and Paul Fisher continuing to push for another GBP 25B in quantitative easing, but the central bank struck a rather dovish tone for monetary policy and said ‘the short-run trade-off between output growth and inflation meant that the Committee could return inflation to the target more quickly than currently expected only by taking policy actions that would provide less support to output.’ The cautious policy statement failed to prop up the British Pound, with the GBPUSD slipping back below the 1.5300 figure, and the sterling continued to lose ground throughout the day as the pair closed at 1.5238.