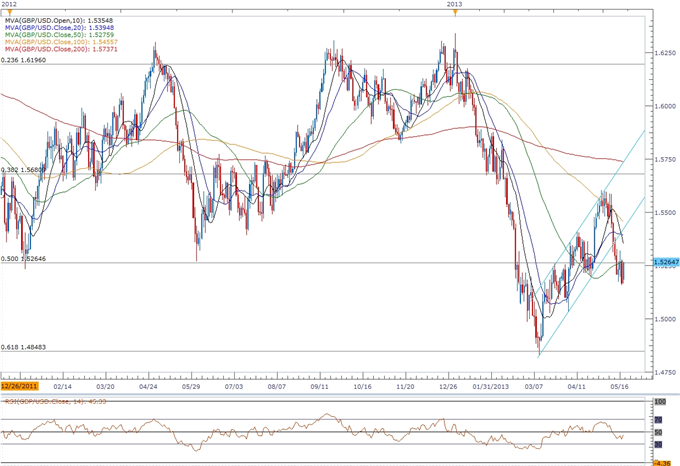 The headline reading for U.K. inflation is expected to increase an annualized 2.6% in April following the 2.8% expansion the month prior, and easing price pressures may dampen the appeal of the British Pound as it raises the Bank of England’s (BoE) scope to further embark on quantitative easing. However, as the region is expected to face above-target inflation over the policy horizon, we may see the BoE switch gears later this year, and the central bank may start to discuss a tentative exit strategy in the second-half of 2013 as the economic recovery slowly picks up.

Firms in the U.K. may boost consumer prices amid the ongoing expansion in consumer credit along with the improvements in the labor market, and a strong inflation print should prop up the sterling as it dampens bets for more QE. However, subdued wage growth paired with the slowdown in private sector consumption may push businesses to conduct heavy discounting, and a weaker-than-expected inflation print may drag on the sterling as it fuels bets for additional monetary support.

Although the GBPUSD failed to maintain the upward trend from earlier this year, the pair appears to be carving out a higher low in May, and we may see the pound-dollar work its way back towards the 38.2% Fibonacci retracement from the 2009 low to high around 1.5680 amid the shift in the policy outlook. However, we may see the GBPUSD struggle to hold above the 50.0% retracement (1.5260) on a soft inflation print, and the sterling may struggle to hold its ground ahead of the BoE Minutes due out on May 22 should the consumer price report renew bets for more BoE easing.

Forecasts for a slower rate of inflation casts a bearish outlook for the sterling , but sticky price growth may pave the way for a long British Pound trade as it dampens the scope for additional monetary support. Therefore, if the CPI tops market expectations, we will need a green, five-minute candle following the development to establish a long entry on two-lots of GBPUSD. Once these conditions are met, we will set the initial stop at the nearby swing low or a reasonable distance from the entry, and this risk will generate our first objective. The second target will be based on discretion, and we will move the stop on the second lot to breakeven once the first trade hits its mark in an effort to protect our gains.

On the other hand, the persistent weakness in wage growth along with the drop in retail spending may drag on inflation, and a weak CPI print may spark a sharp selloff ahead of the BoE Minutes as it fuels speculation for more easing. As a result, if price growth slows to an annualized pace of 2.6% or lower, we will implement the same strategy for a short pound-dollar trade as the long position laid out above, just in the opposite direction.

Consumer prices in the U.K. increased another annualized 2.8% in March as businesses continued to scale back on discounting, while the core rate of inflation advanced 2.4% during the same period amid forecasts for a 2.3%. Although the initial reaction to U.K. CPI was fairly muted, the British Pound firmed up throughout the day, with the GBPUSD climbing back above the 1.5300 figure, and the sterling continued to gain ground during the North American trade as the pair closed at 1.5360.