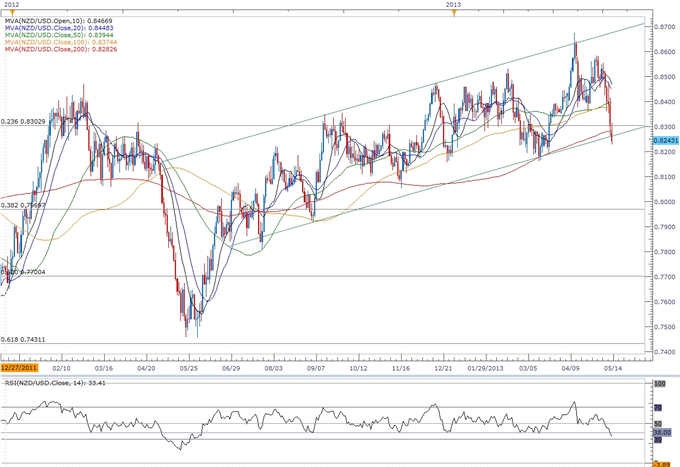 New Zealand retail sales are projected to increase another 0.8% in the first-quarter of 2013 and the ongoing expansion in private sector consumption may increase the appeal of the New Zealand dollar as it raises the outlook for growth. Indeed, the Reserve Bank of New Zealand (RBNZ) may adopt a more hawkish tone for monetary policy at June 12 meeting as the economic recovery gathers pace, and Governor Graeme Wheeler may have little choice but to raise the benchmark interest rate from 2.50% as the rebuilding efforts from the Christchurch earthquake raises the risk for an asset bubble.

The rebound in consumer confidence along with the sharp rise in employment may encourage a strong retail sales figure, and a positive development may spark a near-term rally in the New Zealand dollar as it heightens bets for a rate hike. However, the slowdown in private sector credit along with easing wage pressures may drag on household spending, and the RBNZ may keep the cash rate at the record-low throughout 2013 in an effort to encourage a stronger recovery.

As the NZDUSD threatens the upward trend dating back to June, with the relative strength index failing to find support around the 38 figure, the pullback from 0.8675 may gather pace over the near to medium-term, but we may see ascending channel continue to take shape should the retail sales report heighten speculation for a rate hike. However, a dismal development may trigger an even larger decline in the exchange rate, and we may see the NZDUSD work its way back towards the 23.6% Fibonacci retracement from the 2010 low to the 2011 high around 0.7960-70 as market participants scale back bets of seeing the RBNZ normalize monetary policy later this year.

Forecasts for second consecutive rise in retail sales instills an bullish outlook for the kiwi, and a positive development may pave the way for a long New Zealand dollar trade as it raises the RBNZ’s scope to lift the benchmark interest rate off of the record-low. Therefore, if spending increases 0.8% or more in the first three-months of 2013, we will need to see a green, five-minute candle following the release to generate a long entry on two-lots of NZDUSD. Once these conditions are met, we will set the initial stop at the nearby swing low or a reasonable distance from the entry, and this risk will establish our first objective. The second target will be based on discretion, and we will move the stop on the second lot to cost once the first trade hits its mark in order to protect our gains.

On the other hand, slowing wage growth paired with the ongoing slack in the real economy may produce a weak sales report, and a dismal release may drag on the exchange rate as it limits the RBNZ’s scope to push through higher borrowing costs. As a result, if the report falls short of market expectations, we will implement the same strategy for a short kiwi-dollar trade as the short position laid out above, just in the opposite direction.

Household spending increased 2.1% during the last four-months of 2012 after contracting revised 0.2% in the third-quarter, and the rebound in private sector consumption may encouraged the Reserve Bank of New Zealand to adopt a more hawkish tone for monetary policy as the outlook for growth and inflation improves. Indeed, the New Zealand dollar tracked higher following the better-than-expected print, with the NZDUSD climbing above the 0.8500 figure, but the higher-yielding currency struggled to hold its ground throughout the day as the pair closed at 0.8439.