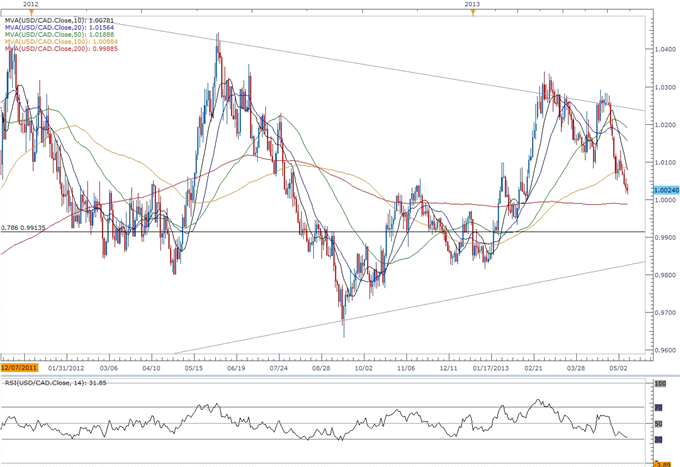 The Canadian economy is expected to add 15.0K jobs in April and a strong rebound in employment should prop up the loonie as it raises the outlook for growth. Although the Bank of Canada (BoC) has softened its tone for a rate hike, a marked improvement in the labor market may fuel bets for higher borrowing costs, and we may see central bank Governor Mark Carney sound more hawkish over the coming months as the economic recovery gradually gathers pace.

The pickup in private sector consumption may push businesses to expand their labor force, and a marked improvement in employment should increase the appeal of the Canadian dollar as it reignites speculation for higher borrowing costs. However, the recent slowdown in the housing market along with the rising input costs may drag on hiring, and a dismal development may weigh on the exchange rate as it dampens the BoC’s scope to normalize monetary policy.

As the USDCAD remains stuck within the wedge/triangle formation, we may see the exchange rate continue to consolidate over the near to medium-term, but we may see a move back towards the 78.6% Fibonacci retracement from the 2007 low to the 2009 high around 0.9910 should the employment report highlight an improved outlook for the Canadian economy. However, the recent decline in the dollar-loonie may be short-lived as the relative strength index approaches oversold territory, and the pair may continue to threaten trendline resistance as BoC Governor Mark Carney preserves a neutral stance for monetary policy.

Expectations for a rebound in employment favors a bullish outlook for the loonie, and a marked uptick in employment may pave the way for a long Canadian dollar trade as it fuels bets for higher borrowing costs. Therefore, if the economy adds 15.0K jobs or more in April, we will need a red, five-minute candle following the report to establish a sell entry on two-lots of USDCAD. Once these conditions are met, we will set the initial stop at the nearby swing high or a reasonable distance from the entry, and this risk will generate our first objective. The second target will be based on discretion, and we will move the stop on the second lot to cost once the first trade hits its mark in order to preserve our profits.

On the other hand, the ongoing weakness in the real economy along with the slowdown in business spending may drag on hiring, and a dismal print may dampen the appeal of the loonie as it limits the scope for a rate hike. As a result, if the print falls short of forecast, we will implement the same strategy for a long dollar-loonie trade as the short position laid out above, just in reserve.

Canadian employment tumbled 54.5K in March following the 50.7K expansion the month prior, while the jobless rate unexpectedly climbed to 7.2% from 7.0% to mark the highest reading since November. Indeed, the Canadian dollar struggled to hold its ground following the dismal report, with the USDCAD climbing above the 1.0200 figure, but we saw the loonie consolidate throughout the North American trade as the pair ended the day at 1.0172.