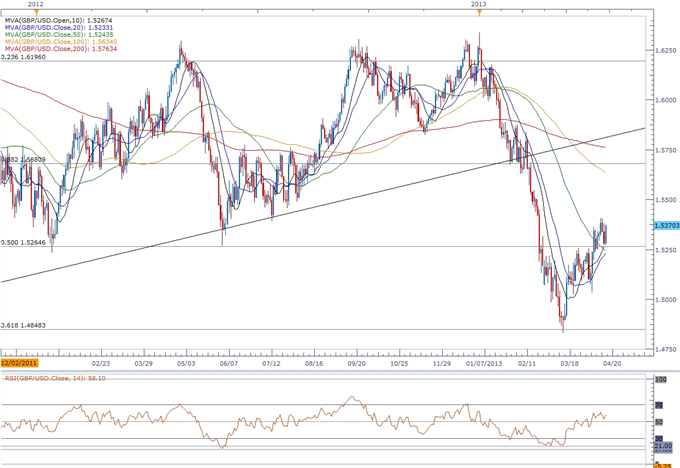 The Bank of England (BoE) Minutes may instill a bullish outlook for the British Pound as the central bank retains a neutral stance for monetary policy, and the fresh batch of central bank rhetoric may trigger a short-term rally in the GBPUSD as market participants scale back bet for more quantitative easing. Beyond the vote count, the BoE to sound more hawkish this time around as the central bank sees above-target inflation over the next three-years, and it seems as though the Monetary Policy Committee (MPC) is slowly moving away from its easing cycle as the they anticipate a slow but sustainable recovery in the U.K.

Sticky price growth along with the ongoing expansion in consumer credit may prompt the BoE to adopt a more neutral to hawkish tone for monetary policy, and the central bank may start to discuss a tentative exit strategy in the second-half of the year as the committee sees a limited risk for a triple-dip recession. However, the MPC may keep the door open to expand the balance sheet further amid the persistent slack in the real economy, and the central bank may show a greater willingness to increase the asset purchase program beyond the GBP 375B target in an effort to encourage a stronger recovery.

As the British Pound comes off of former support – the 50.0% Fibonacci retracement from the 2009 low to high around 1.5260 – a less dovish statement from the BoE should produce further advances in the GBPUSD, and the pair may continue to retrace the sharp decline from earlier this year should the central bank talk down speculation for more QE. However, fears of a triple-dip recession may spur further support for a highly accommodative policy stance, and we may see the MPC continue to embark on its easing cycle in order to get the U.K. economy on a more sustainable path.

Trading the BoE Minutes may not be as clear cut as some of our previous trades, but a more hawkish statement may pave the way for a long British Pound trade as market participants scale back bets for additional monetary support. Therefore, if the MPC signals an end to the easing cycle, we will need a green, five-minute candle following the release to establish a buy entry on two-lots of GBPUSD. Once these conditions are fulfilled, we will set the initial stop at the nearby swing low or a reasonable distance from the entry, and this risk will generate our first objective. The second target will be based on discretion, and we will move the stop on the second lot to breakeven once the first trade hits its mark in order to preserve our profits.

On the other hand, the BoE may keep the door open to expand its balance sheet further as the U.K. faces a protracted recovery, and the central bank may retain a highly accommodative policy stance over the near to medium-term in an effort to get the economy on a more sustainable path. As a result, if the committee shows a greater willingness to implement more QE, we will carry out the same setup for a short pound-dollar trade as the long position mentioned above, just in the opposite direction.

The Bank of England (BoE) Minutes showed another 6-3 split within the Monetary Policy Committee, with Governor King, David Miles and Paul Fisher pushing for another GBP 25B in quantitative easing, but it seems as though the majority will stick to the sidelines as inflation is expected to hold above the 2% target over the policy horizon. Indeed, the British Pound benefitted from the neutral policy stance, with the GBPUSD testing the 1.5150 figure, but we saw the sterling consolidate during the North American trade as the pair ended the day at 1.5096.