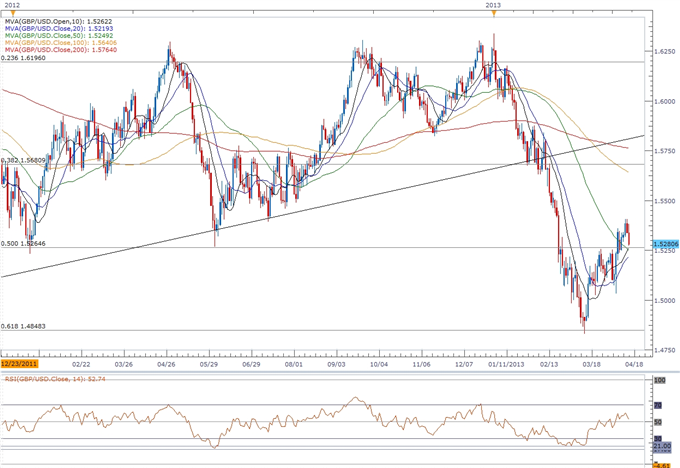 U.K. Consumer Prices are projected to increase another 2.8% in March and sticky price growth may increase the appeal of the British Pound as it dampens the Bank of England’s (BoE) scope to expand the balance sheet further. As the central bank anticipates a slow but sustainable recovery in Britain, above-target inflation should keep the Monetary Policy Committee on the sidelines, and we may see a growing number of BoE officials adopt a more neutral to hawkish tone for monetary policy as the Funding for Lending Scheme continues to work its way through the real economy.

Indeed, businesses in the U.K. may hike consumer prices amid the sharp rebound in retail sales paired with rising input costs, and an uptick in the headline reading for inflation may spark a bullish reaction in the British Pound as the dampens bets for more quantitative easing. However, the persistent slack in the real economy along with the slowdown in wage growth may encourage firms to offer discounted prices, and a weak CPI print may drag on the exchange rate as it fuels speculation for additional monetary support.

As the GBPUSD comes up against former support – the 50.0% Fibonacci retracement from the 2009 low to high around 1.5260 – a strong inflation print may trigger a sharp reversal in the exchange rate, and we may see the sterling continue to retrace the sharp decline from earlier this year as the BoE appears to be slowly moving away from its easing cycle. However, the pound-dollar may fail to hold the key level on a soft inflation print, and the British Pound may struggle to hold its ground ahead of the BoE Minutes should the data heighten speculation for more QE.

Trading the given event risk may not be as clear cut as some of our previous trades as price growth is expected to hold steady in March, but an unexpected uptick in price growth may pave the way for a long British Pound trade as it dampens the scope for more QE. Therefore, if the CPI tops market expectations, we will need to see a green, five-minute candle following the release to generate a long entry on two-lots of GBPUSD. Once these conditions are met, we will set the initial stop at the nearby swing low or a reasonable distance from the entry, and this risk will establish our first target. The second objective will be based on discretion, and we will move the stop on the second lot to cost once the first trade hits its mark in an effort to protect our gains.

In contrast, the recent weakness in wage growth along with fears of a triple-dip recession may drag on inflation, and a CPI may spark a sharp selloff ahead of the BoE Minutes as it fuels speculation for additional monetary support. As a result, if the release disappoints, we will carry out the same setup for a short pound-dollar trade as the long position laid out above above, just in reverse.

The headline reading for U.K. inflation grew an annualized 2.8% in February following the 2.7% expansion the month prior, while the core rate held steady at 2.3% for the second month. Indeed, the pickup in price growth propped up the British Pound, with the GBPUSD climbing above 1.5100, but we saw the sterling consolidate during the North American trade as the pair closed at 1.5097.