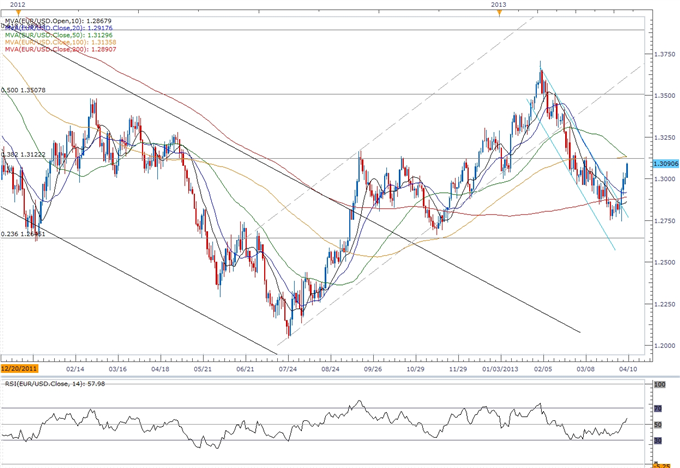 The FOMC Minutes highlight the biggest event risk for the next 24-hours of trading and the fresh batch of central bank rhetoric may heighten the appeal of the USD should we see a growing number of Fed officials scale back their willingness to expand the balance sheet further. Although the FOMC sticks to its highly accommodative policy stance, the committee may strike a more neutral to hawkish tone for monetary policy as the economic recovery gradually gathers pace.

The Fed may sound more upbeat this time around as the resilience in private sector consumption along with the expansion in consumer credit raises the outlook for growth, and we may see the central bank slowly move away from its easing cycle as the world’s largest economy gets on a more sustainable path. However, the lull in business outputs paired with the protracted recovery in the labor market may push the FOMC to strike a more cautious tone for the region, and the central bank may embark on quantitative easing throughout 2013 in an effort to stem the downside risks for growth and inflation.

As the EURUSD breaks out of the descending channel dating back to February, the pair certainly appears to be making a run at the 38.2% Fibonacci retracement from the 2009 high to the 2010 low around 1.3120, but the near-term rally may taper off ahead of the key figure should the FOMC strike an improved outlook for the U.S. economy. As the central bank anticipate a stronger recovery this year, we are likely to see a growing number of Fed officials adopt a more neutral to hawkish tone for monetary policy, and the committee may slowly move away from its easing cycle over the coming months as growth and inflation picks up.

Trading the given event risk may not be as clear cut as some of our previous trades, but the slew of central bank rhetoric may prop up the greenback should the central bank sound more upbeat towards the U.S. economy. Therefore, if we see a growing number of Fed officials scale back their willingness to expand the balance sheet further, we will need a red, five-minute candle following the statement to generate a sell entry on two-lots of EURUSD. Once these conditions are met, we will set the initial stop at the nearby swing high or a reasonable distance from the entry, and this risk will establish our first objective. The second target will be based on discretion, and we will move the stop on the second lot to cost once the first trade hits its mark in an effort to lock-in our profits.

On the other hand, the FOMC may sound more cautious this time around amid the ongoing slack in private sector activity, and the committee may favor more QE in order to encourage a stronger recovery. As a result, if the Fed shows an increased willingness to carry out its asset purchase program throughout 2013, we will implement the same strategy for a long euro-dollar trade as the short position mentioned above, just in the opposite direction.

Although the FOMC retained its highly accommodative policy stance in January, some members ‘emphasized that the committee should be prepared to vary the pace of asset purchases, either in response to changes in the economic outlook or as its evaluation of the efficacy and costs of such purchases evolved’ according to the meeting minutes. As a growing number of Fed officials scale back their willingness to expand the balance sheet further, the statement pushed the EURUSD back below the 1.3300 figure, and the greenback managed to hold its ground throughout the North American trade as the pair ended the day at 1.3281.