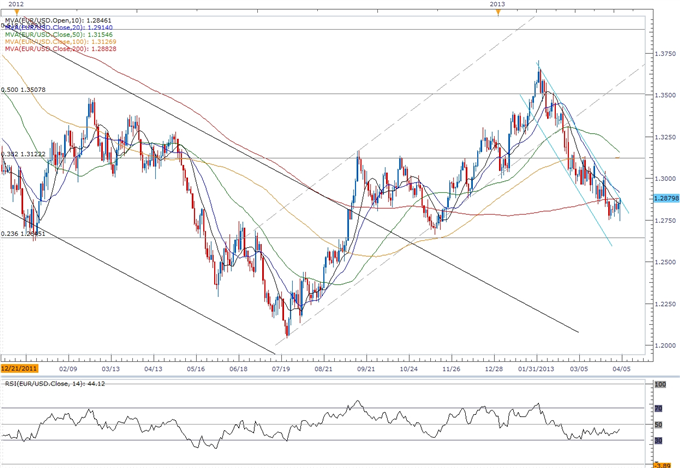 The world’s largest economy is expected to add another 190K job in March, and the ongoing improvement in the labor market should heighten the appeal of the U.S. dollar as it dampens the Fed’s scope to expand the balance sheet further. As the recovery gradually gathers pace, it seems as though the FOMC is slowly moving away from its easing cycle, and the central bank may scale back its asset purchase program over the coming months as the outlook for growth and inflation picks up.

As the resilience in private sector consumption helps to foster a more broad-based recovery in the U.S., the ongoing strength in household spending may encourage businesses to expand their labor force, and we may see a further return of discouraged workers to the labor force as the central bank turns increasingly upbeat towards the economy. However, the persistent slack in the real economy may continue to drag on job growth, and a dismal NFP print may renew speculation for more quantitative easing as the Fed looks for a faster recovery.

The EURUSD is threatening the downward trending channel following the European Central Bank interest rate decision, but the move above the 200-Day SMA (1.2882) may be short-lived as the long-term bearish flag formation continues to pan out. However, we may see a short-term reversal take shape should NFPs fall short of market expectations, and the EURUSD work its way back towards the 1.3000 figure should the data renew expectations for more Fed support.

Trading the given event risk may not be as clear cut as some of our other trades as employment is expected to grow at a slower pace in March, but a positive development may pave the way for a long U.S. dollar trade as it dampens the Fed’s scope to implement more QE. Therefore, if NFPs increase 190K or greater, we will need a red, five-minute candle following the report to establish a sell entry on two-lots of EURUSD. Once these conditions are met, we will set the initial stop at the nearby swing high or a reasonable distance from the entry, and this risk will generate our first target. The second objective will be based on discretion, and we will move the stop on the second lot to breakeven once the first trade hits its mark in order to preserve our profits.

On the other hand, the ongoing weakness in the real economy may continue to drag on employment, and a dismal labor print may weigh on the greenback as it fuels bets for additional monetary support. As a result, if NFPs disappoint, we will implement the same strategy for a long euro-dollar trade as the short position laid out above, just in the opposite direction.

U.S. Non-Farm Payrolls increased another 236K in March after expanding a revised 119K the month prior, while the jobless rate unexpectedly slipped to 7.7% from 7.9% as discouraged workers ended up leaving the labor force. Despite the drop in the participation rate, the dollar tracked higher following the print, with the EURUSD slipping below the 1.3000 figure, but we saw the greenback consolidate during the North American trade as the pair ended the day at 1.2999.