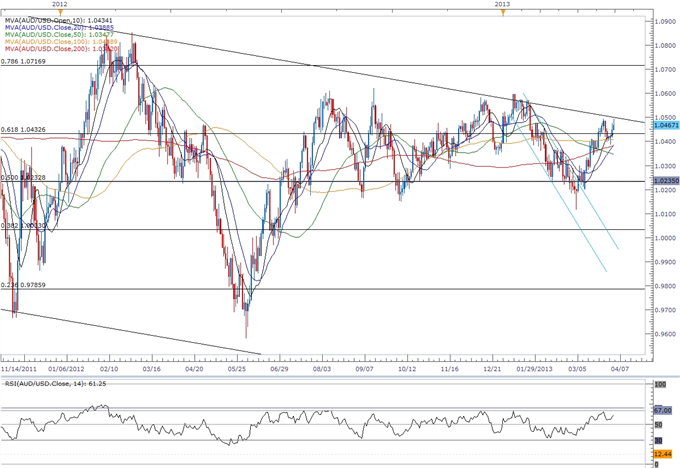 Retail spending in Australia is projected to increase another 0.3% during the month of February, and the ongoing expansion in private sector consumption may push the AUDUSD higher over the next 24-hours of trading as it dampens bets for another rate cut. As the Reserve Bank of Australia (RBA) keeps the benchmark interest rate at 3.00%, a positive print may encourage the central bank to drop its dovish tone for monetary policy, but Governor Glenn Stevens may keep the door open to lower borrowing costs further as the region faces an uneven recovery.

The pickup in job growth paired with the ongoing improvement in household sentiment may prompt Australian to increase their rate of consumption, and a strong retail sales report may push the RBA to preserve its current policy throughout 2013 as it raises the outlook for growth. However, the slowdown in private sector credit along with the uptick in inflation expectations may drag on spending, and a dismal development may dampen the appeal of the higher-yielding currency as it raises the scope for a rate cut.

Although the RBA interest rate decision propped up the AUDUSD, we’re still watching the downward trend carried over from back in 2011 as the pair continues to carve out a lower high just below the 1.0500. In turn, the aussie-dollar looks poised to give back the rebound from March (1.0114), and we may see the pair push to a fresh yearly low as the bearish trend continues to pan out.

Expectations for a further expansion in retail spending certainly favors a bullish bias for the higher-yielding currency, and a positive print may pave the way for a long Australian dollar trade as it raises the outlook for growth. Therefore, if sales increases 0.3% or greater, we will need a green, five-minute candle subsequent to the release to establish a long entry on two-lots of AUDUSD. Once these conditions are fulfilled, we will set the initial stop at the nearby swing low or a reasonable distance from the entry, and this risk will generate our first objective. The second target will be based on discretion, and we will move the stop on the second lot to cost once the first trade hits in mark in an effort to lock-in our gains.

On the other hand, the slowdown in private sector credit along with the rebound in inflation expectations may drag on retail spending, and a weak print may drag on the exchange rate as it fuels speculation for a rate cut. As a result, if the sales report falls short of market expectations, we will carry out the same setup for a short aussie-dollar trade as the long position laid out above, just in reverse.

Household spending increased 0.9% in January following 0.4% contraction the month prior, with demands for household goods increasing 1.3%, while department store sales slipped 0.6% after rising 0.7% in December. The rebound in retail sales propped up the Australian dollar, with the AUDUSD trading back above the 1.0200 figure, and the higher-yielding currency gained ground throughout the day as it closed at 1.0255.