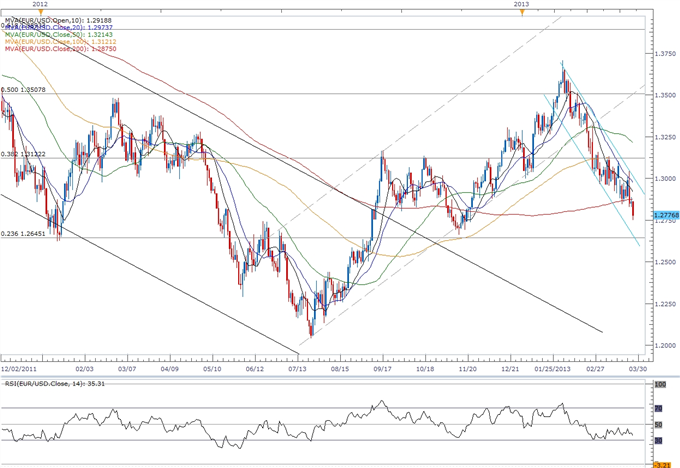 Unemployment in Germany is projected to fall another 2K in March following the 3K decline the month prior, while the jobless rate is expected to hold steady at 6.9% for the sixth consecutive month. Despite the ongoing slack in Europe’s largest economy, a positive labor report may increase the appeal of the Euro as it dampens speculation of seeing the European Central Bank (ECB) push the benchmark interest rate to a fresh record-low.

Easing input costs along with the sharp rebound in household spending may encourage businesses to increase hiring, and a marked decline in unemployment may keep the ECB on the sidelines as the central bank anticipates the euro-area to return to growth later this year. However, the persistent weakness in manufacturing and service-based activity may continue to drag on the German labor market, and we may see a growing number of central bank officials show a greater willingness to implement another rate cut as the economic downturn threatens price stability.

As the downward trending channel in the EURUSD continues to take shape, the pair looks poised for a move back towards the 23.6% Fibonacci retracement from the 2009 high to the 201 low around 1.2640-50, and the bearish sentiment surrounding the Euro may gather pace over the next 24-hours of trading should the German unemployment report dampen the fundamental outlook for Europe’s largest economy. However, we may see the EURUSD consolidate ahead of the ECB interest rate decision scheduled for April 4 as market participants weigh the outlook for monetary policy, and we may see a relief rally in the euro-dollar should the central bank increase its pledge to save the Euro.

Expectations for a further improvement in Germany’s labor market casts a bullish outlook for the single currency, and a positive print may pave the way for a long Euro trade as it dampens bets for an ECB rate cut. Therefore, if unemployment slips 2K or greater in March, we will need to see a green, five-minute candle following the release to establish a buy entry on two-lots of EURUSD. Once these conditions are met, we will set the initial stop at the nearby swing low or a reasonable distance from the entry, and this risk will generate our first objective. The second target will be based on discretion, and we will move the stop on the second lot to cost once the first trade reaches its mark in order to preserve our profits.

In contrast, the ongoing slack in the real economy may continue to drag on job growth as businesses keep a cap on production, and the report may highlight a weakening outlook for the region as the euro-area remains mired in a recession. As a result, if the report disappoints, we will implement the same strategy for a short euro-dollar trade as the long position mentioned above, just in the opposite direction.

Unemployment in Europe’s largest economy slipped another 3K during February after contracting a revised 14K the month prior, while the jobless rate held steady at an annualized 6.9% following an upward revision in last month’s reading. Indeed, the Euro tracked lower following the uptick in the jobless rate, with the EURUSD threatening the 1.3100 region, and the single currency tracked lower throughout the North American trade as the pair ended the day at 1.3056.