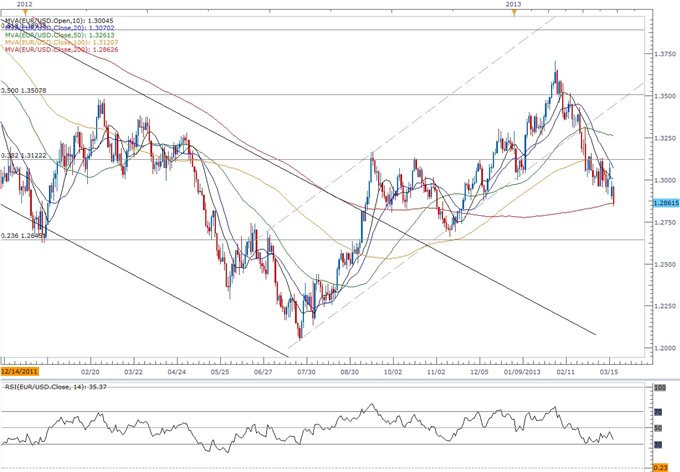 Although the Federal Open Market Committee (FOMC) is widely anticipated to maintain its highly accommodative policy in March, the policy statement accompanying the rate decision along with the central bank’s updated forecast should heighten the bullish sentiment surrounding the U.S. dollar as the committee scales back its willingness to expand the balance sheet further. Indeed, we may see a growing number of central bank officials adopt a more hawkish tone for monetary policy as the economic recovery gradually gathers pace, and the committee may start to draw up a tentative exit strategy over the coming months as the world’s largest economy gets on a more sustainable path.

Renewed price pressures in the U.S. along with the pickup in job growth may encourage the Fed to strike a more hawkish tone for monetary policy, and the central bank remains poised to switch gears later this year as the outlook for growth and inflation improves. However, subdued wage growth paired with the recent weakness in household sentiment may push the FOMC to retain a cautious tone for the U.S. economy, and the central bank may retain its highly accommodative policy stance throughout 2013 in an effort to encourage a stronger recovery.

The EURUSD looks poised to give back the rebound from November (1.2659) as it struggles to climb back above the 38.2% Fibonacci retracement from the 2009 high to the 2010 low around 1.3120, and we are looking for a move back towards the 23.6% retracement (1.2640-50) amid the deviation in the policy outlook. In turn, we should see the long-term bearish flag formation continue to pan out, and we will maintain a bullish forecast for the dollar as the Fed turns increasingly upbeat towards the economy.

Trading the given event risk may not be as clear cut as some of our previous trades as the Fed preserves its current policy, but a further shift in the policy outlook may serve as the fundamental catalyst to spark a bullish reaction in the U.S. dollar as market participants weigh the outlook for monetary policy. Therefore, if the FOMC strikes a more hawkish tone for monetary policy, we will need a red, five-minute candle following the statement to establish a sell entry on two-lots of EURUSD. Once these conditions are fulfilled, we will set the initial stop at the nearby swing high or a reasonable distance from the entry, and this risk will generate our first target. The second objective will be based on discretion, and we will move the stop on the second lot to breakeven once the first trade hits its mark in order to preserve our profits.

In contrast, the Fed may retain a cautious tone amid the ongoing slack in the real economy, and the central bank may keep the door open to expand policy further in an effort to stem the downside risks surrounding the world’s largest economy. As a result, if the FOMC shows a greater willingness to embark on its easing cycle throughout 2013, we will carry out the same setup for a long euro-dollar trade as the short position laid out above, just in the opposite direction.

The FOMC stuck to its current policy in January as the central bank adopts a ‘qualitative approach’ for monetary policy, while board member Esther George dissented against the majority as ‘the continued high level of monetary accommodation increases the risks of future economic and financial imbalances and, over time, could cause an increase in long-term inflation expectations’. The initial reaction was short-lived as the EURUSD struggled to hold above the 1.3575 region, and we saw the pair consolidate throughout the North American trade as the pair ended the day at 1.3565.