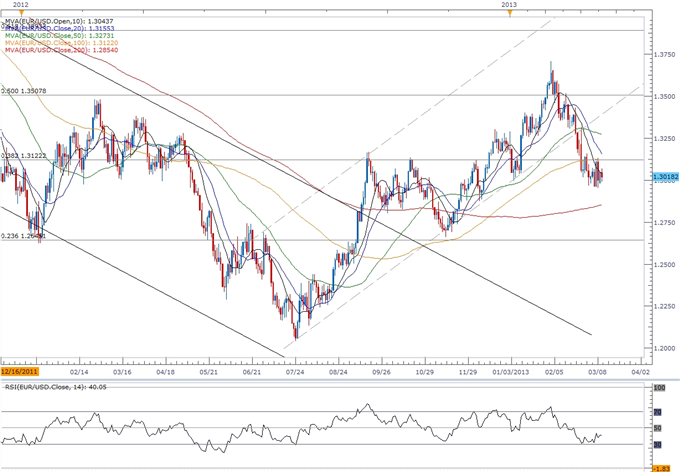 U.S. retail sales are expected to increase another 0.5% in February and the resilience in private sector consumption spark a near-term rally in the dollar as it remains one of the leading drivers of growth. As the economic recovery gradually gathers pace, we should see a growing number of Fed officials adopt a more hawkish tone for monetary policy, and the FOMC remains poised to switch gears later this year as the world’s largest economy gets on a more sustainable path.

The pickup in job growth along with the ongoing improvement in household confidence certainly bodes well for retail sales, and marked pickup in private consumption should heighten the appeal of the USD as it dampens the Fed’s scope to expand its balance sheet further. However, the sales report may disappoint as Americans face subdued wage growth paired sticky price growth, and the Fed may continue to target the persistent slack in the real economy in an effort to encourage a stronger recovery.

Although we’re seeing the relative strength index on the EURUSD bounce back from oversold territory, the pair may continue to give back the rebound from November amid the lack of momentum to trade back above the 38.2% Fibonacci retracement from the 2009 high to the 2010 low around 1.3120. As growth prospects for the U.S. improves, we may see the multi-year bearish flag formation continue to pan out, and the pair looks poised for a move back towards the 23.6% retracement (1.2640-50) amid the shift in the policy outlook.

Forecasts for a faster rate of consumption encourages a bullish outlook for the greenback, and a positive print may pave the way for a long U.S. dollar trade should the report dampen expectations for more QE. Therefore, if retail sales increase 0.5% or greater, we will need to see a red, five-minute candle following the release to establish a sell entry on two-lots of EURUSD. Once these conditions are met, we will set the initial stop at the nearby swing high or a reasonable distance from the entry, and this risk will generate our first target. The second objective will be based on discretion, and we will move the stop on the second lot to cost once the first trade hits its mark in an effort to lock-in our gains.

In contrast, the lack of wage growth paired with sticky prices may weigh on household spending, and a further slowdown in retail sales may drag on the dollar as it fuels bets for more QE. As a result, if the report disappoints, we will carry out the same setup for a long euro-dollar trade as the short position mentioned above, just in reverse.

Household spending increased another 0.1% in January following the 0.5% expansion the month prior, led by a 1.1% rise at general merchandise stores, while online sales climbed 0.9% for the second consecutive month. The U.S. dollar tipped higher despite the in-line print, and the greenback continued to gain ground during the North American trade as the EURUSD ended the day at 1.3450.