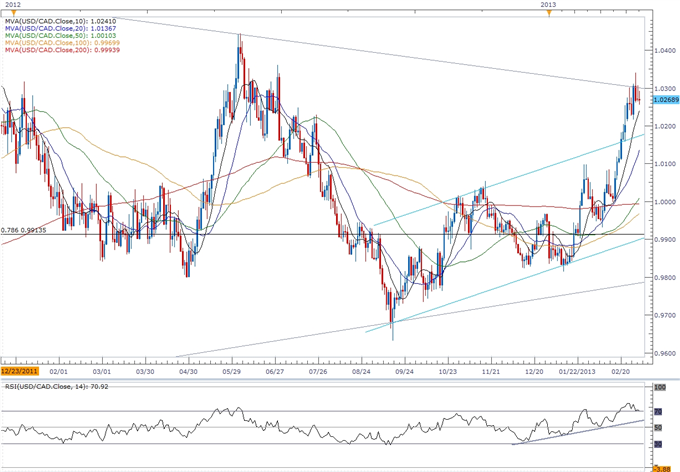 Although the Bank of Canada (BoC) is widely expected to keep the benchmark interest rate at 1.00% in March, the fresh batch of central bank rhetoric accompanying the rate decision may instill a bearish outlook for the Canadian dollar should Governor Mark Carney adopt a more dovish tone for monetary policy. As Canada faces a slowing recovery, the BoC may continue to talk down bets for a rate hike, and the central bank may stick to the sidelines throughout 2013 in an effort to stem the downside risks for growth and inflation.

Improving trade conditions along with the rise in business spending may encourage BoC Governor Carney to strike a more hawkish tone for monetary, and the central bank may show a greater willingness to lift the benchmark interest rate from 1.00% to further mitigate the record-rise in household indebtedness. However, the weak retail sales figures paired with the downturn in employment may dampen the central bank’s scope to implement a rate hike, and the BoC may retain its wait-and-see approach over the near to medium-term in order to encourage a stronger recovery.

As the USDCAD comes up against trendline resistance, the pair looks poised for a correction, and the BoC rate decision may serve as the fundamental catalyst to trigger a short-term reversal in the exchange rate should the central bank show a greater willingness to lift the benchmark interest rate from 1.00%. Although the relative strength index continues to highlight an overbought signal, a dovish policy statement may produce a fresh high in the exchange rate before we finally see a correction as market participants scale back bets for a rate hike.

As the BoC retains its current policy, we will be keeping a close eye on the statement accompanying the rate decision, and the fresh batch of central bank rhetoric may set the stage for a long Canadian dollar trade amid bets for higher borrowing costs. Therefore, if Governor Carney sees a greater case for a rate hike, we will need to see a red, five-minute candle following the announcement to establish a sell entry on two-lots of USDCAD. Once these conditions are met, we will set the initial stop at the nearby swing high or a reasonable distance from the entry, and this risk will generate our first objective. The second target will be based on discretion, and we will move the stop on the second lot to breakeven once the first trade hits its mark in order to lock-in our gains.

On the other hand, easing price pressures paired with the renewed slack in private sector activity may lead the BoC to endorse a wait-and-see approach for the policy horizon, and we may see Governor Carney sound more dovish this time around as the fundamental outlook for the region deteriorates. As a result, if the central bank head seems limited scope for a rate hike, we will carry out the same setup for a long dollar-loonie trade as the short position mentioned above, just in reverse.

Although the Bank of Canada kept the benchmark interest rate at 1.00%, Governor Mark Carney struck a rather dovish tone for monetary policy and said ‘the more muted inflation outlook and the beginnings of a more constructive evolution of imbalances in the household sector suggest that the timing of any such withdrawal is less imminent than previously anticipated.’ Indeed, the shift in central bank rhetoric dragged on the Canadian dollar, with the USDCAD clearing the 0.9950 figure, and the loonie struggled to hold its ground throughout the North American trade as the pair closed at 0.9989.