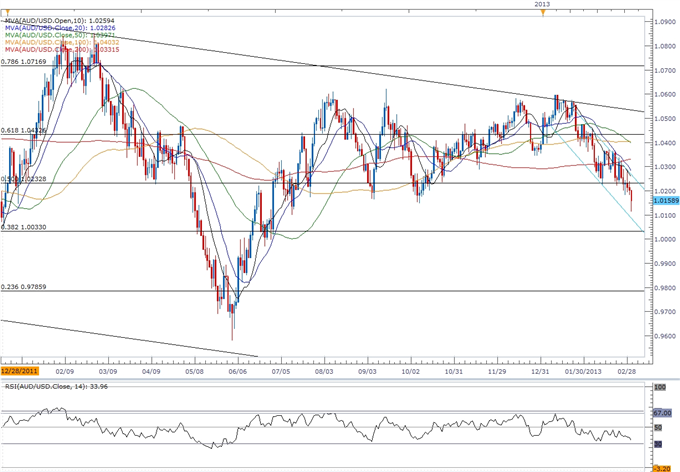 A Bloomberg News survey shows 27 of the 29 economists polled see the Reserve Bank of Australia (RBA) keeping the benchmark interest rate at 3.00%, while market participants are pricing a 17% chance for a 25bp rate cut according to Credit Suisse overnight index swaps. Although there’s little expectations of seeing the RBA implement additional monetary support, the policy statement accompanying the rate decision may continue to dampen the appeal of the high-yielding currency as the central bank keeps the door open to lower borrowing costs further.

The pickup in wage growth paired with the rebound in employment may prompt the RBA to adopt a more neutral tone for monetary policy, and we may see Governor Stevens stick to the sidelines over the coming months as the central bank head highlights the bright signs coming out of the $1T economy. However, the RBA may take additional steps to encourage a stronger recovery amid the slowdown in private sector consumption along with the drop in business investment, and Mr. Stevens may show a greater willingness to push the cash rate to a fresh record-low in an effort to stem the downside risks for growth and inflation.

As the downward trending channel in the AUDUSD continues to take shape, a more dovish RBA may trigger a run at the 38.2% Fibonacci retracement from the 2011 high to low around 1.0030, and the bearish sentiment surrounding the high-yielding currency may gather pace over the near to medium-term should Governor Stevens continue to embark on the easing cycle. However, the AUDUSD may reverse course should the central bank talk down bets for further rate cuts, and we will be keeping a close eye on the relative strength index as it approaches oversold territory.

As the RBA is widely expected to maintain its current policy, trading the given event risk may not be as clear cut as some of our previous trades, but a less-dovish statement accompanying the rate decision could set the stage for a long Australian dollar trade as it dampens speculation for more easing. Therefore, if Governor Stevens talks down the risks surrounding the region, we will need a green, five-minute candle following the decision to establish a long entry on two-lots of AUDUSD. Once these conditions are fulfilled, we will set the initial stop at the nearby swing low or a reasonable distance from the entry, and this risk will generate our first target. The second objective will be based on discretion, and we will move the stop on the second lot to cost once the first trade hits its mark in order to preserve our profits.

In contrast, the ongoing slack in the real economy paired with the slowdown in private consumption may continue to dampen the outlook for the $1T economy, and Governor Stevens may show a greater willingness to further embark on the easing cycle in an effort to stem the downside risks surrounding the region. As a result, if the RBA unexpectedly announces a 25bp rate cut or hints at lower borrowing costs, we will carry out the same setup for a short aussie-dollar as the long position mentioned above, just in the opposite direction.

Although the Reserve Bank of Australia held the benchmark interest rate at 3.00%, central bank Governor Glenn Stevens struck a dovish tone for monetary policy and said that ‘the inflation outlook, as assessed at present, would afford scope to ease policy further, should that be necessary to support demand.’ Indeed, speculation for lower borrowing costs dragged on the Australian dollar, with the AUDUSD struggling to hold above the 1.0400 figure, and the high-yielding currency continued to lose ground throughout the day as the pair closed at 1.0388.