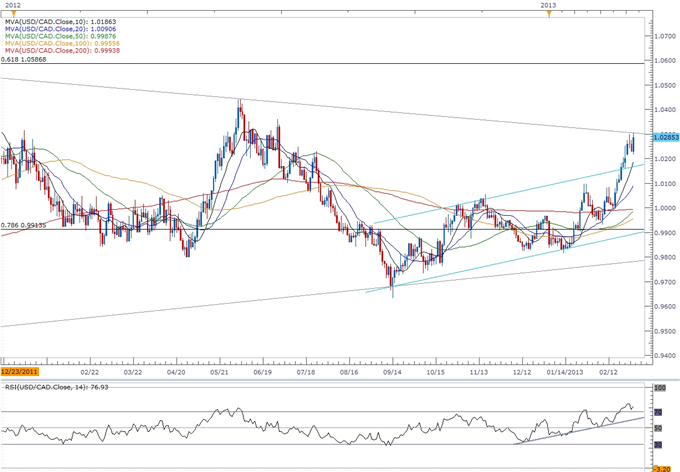 The GDP report is expected to show Canada expanding another 0.6% in the fourth-quarter, but we may see a slowing recovery in the region as the Bank of Canada (BoC) curbs the record-rise in household indebtedness. Indeed, BoC Governor Mark Carney has scaled back his hawkish tone for monetary policy amid the recent lull in economic activity, and a dismal growth report may spark a selloff in the Canadian dollar as the central bank talks down speculation for a rate hike.

The pickup in business spending along with the improvement in global trade may foster a strong growth reading for Canada, and a large uptick in GDP may trigger a sharp reversal in the USDCAD as the data fuels bets for higher interest rates. However, the slowdown in private sector consumption paired with the recent weakness in the labor market may bring about a dismal GDP report, and we may see a bullish breakout in the exchange should it dampen expectations for a rate hike.

As the USDCAD preserves broad triangle dating back to 2011, an upbeat GDP report should prop up the loonie, and the data may spark a sharp reversal in the exchange rate as it threatens trendline resistance. However, we may see a bullish breakout in the dollar-loonie should the growth rate disappoint, and the pair may continue to retrace the decline from back in 2012 as the upward trend in the relative strength index continues to take shape.

Trading the given event risk may not be as clear cut as some of our previous trades as the economy is expected to grow another 0.6%, but an upbeat GDP report may pave the way for a long Canadian dollar trade should the data heighten expectations for higher borrowing costs. Therefore, if the growth rate tops market forecast, we will need a red, five-minute candle subsequent to the release to generate a sell entry on two-lots of USDCAD. Once these conditions are met, we will set the initial stop at the nearby swing high or a reasonable distance from the entry, and this risk will establish our first target. The second objective will be based on discretion, and we will move the stop on the second lot to cost once the first trade hits its mark in order to lock-in our gains.

In contrast, the drop in private sector consumption along with weaker job growth may produce a dismal GDP report, and a marked slowdown in the economy may drag on the exchange rate as it dampens the scope for a rate hike. As a result, if the growth rate falls short of 0.6%, we will carry out the same setup for a long dollar-loonie trade as the short position laid out above, just in the opposite direction.

Economic activity in Canada increased 0.6% after expanding a revised 1.7% in the second-quarter, and the slower pace of growth may prompt the Bank of Canada to adopt a more dovish tone for monetary policy in an effort to encourage a stronger recovery. The initial reaction was short-lived as the USDCAD failed to make a meaningful move above the 0.9950 figure, and we saw the dollar-loonie consolidate throughout the North American trade as the pair ended the day at 0.9940.