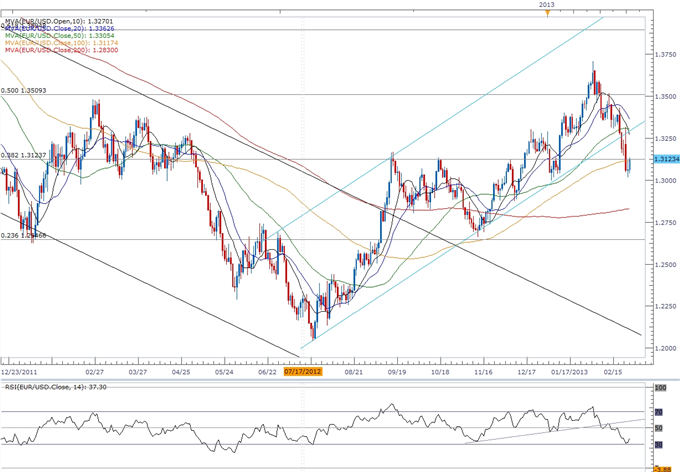 Unemployment in Germany is expected to hold flat during February after contracting 16K the month prior, and a slowdown in job growth may drag on the EURUSD as it dampens the economic outlook for the euro-area. As the EU scales back its GDP forecast and sees the monetary union contracting 0.3% this year, the fundamental developments coming out of Europe may fall short of market expectations, and the European Central Bank (ECB) may continue to carry out its easing cycle in 2013 in an effort to stem the risk for a prolonged recession.

The ongoing improvement in business sentiment paired with the expansion in industrial outputs may produce another decline in unemployment, and a positive development may increase the appeal of the single currency as it encourages an improved outlook for growth. However, the slowdown in global trade along with the recent decline in private sector consumption may weigh on job growth, and we may see a protracted recovery in the labor market amid the ongoing slack in the real economy.

As the relative strength index on the EURUSD bounces back from oversold territory, the rebound from 1.3017 may gather pace over the remainder of the week, and a positive development may put the 1.3250 pivot back on the radar as it dampens bets for an ECB rate cut. However, a weak labor report may prompt another selloff in the EURUSD, and we may see the pair struggle to hold above the 1.3000 figure as the region faces a deepening recession.

Trading the given event risk may not be as clear cut as some of our previous trades, but a positive development may set the stage for a long Euro trade as it raises the outlook for growth. Therefore, if unemployment narrows from the previous month, we will need to see a green, five-minute following the print to generate a long entry on two-lots of EURUSD. Once these conditions are met, we will set the initial stop at the nearby swing low or a reasonable distance from the entry, and this risk will establish our first objective. The second target will be based on discretion, and we will move the stop on the second lot to cost once the first trade hits its mark in an effort to preserve our profits.

In contrast, the slowdown in global trade along with the weakness in private consumption may encourage businesses to keep a lid on hiring, and a dismal report may spark a selloff in the exchange rate as it dampens the outlook for growth. As a result, if unemployment rises from the previous month, we will carry out the same strategy for a short euro-dollar trade as the long position laid out about, just in the opposite direction.

Unemployment in Europe’s largest economy slipped another 16K during the month of January after contracting 2K the month prior, while the jobless rate unexpectedly narrowed to 6.8% from 6.9% to mark the first decline since December 2011. Indeed, the EURUSD tracked higher following the positive print, with the pair climbing towards 1.3570, and the euro-dollar continued to gain ground during the North American trade as it ended the day at 1.3575.