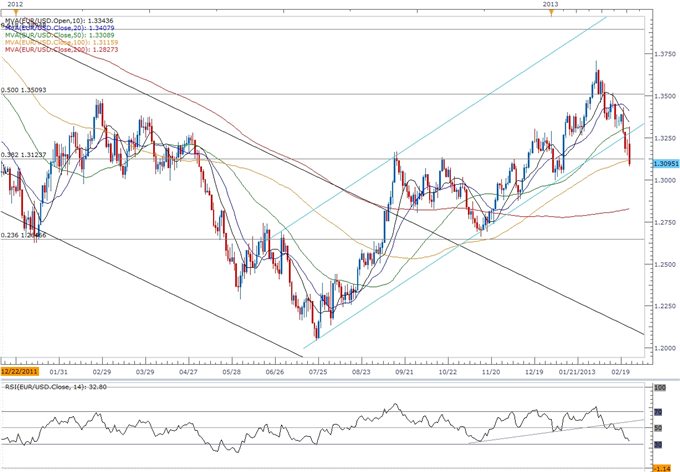 The Conference Board’s Consumer Confidence survey is expected to increase to 62.0 in February and the rebound in household sentiment should prop up the U.S. dollar as it dampens the prospects for additional monetary support. As the FOMC adopts a more neutral tone for monetary policy, a marked improvement in consumer sentiment may further limit the central bank’s scope to expand its asset purchases beyond the $85B monthly limit, and we may see the committee slowly move away from its easing cycle throughout 2013 as the world’s largest economy gets on a more sustainable path.

The budding recovery in the housing market along with the ongoing expansion in private sector credit may prop up household sentiment, and a large uptick in the survey may fuel a short-term rally in the greenback as market participants scale back bets for more quantitative easing. However, the stickiness in underlying inflation paired with the protracted recovery in the labor market may continue to drag on consumer confidence, and another downturn in sentiment may dampen the appeal of the reserve currency as the FOMC pledges to maintain a highly accommodative policy stance for an extended period of time.

As the EURUSD fails to find support around the 38.2% Fibonacci retracement from the 2009 high to the 2010 low around 1.3120, the reversal from 1.3709 may gather pace ahead of the Humphrey-Hawkins Testimony on tap for later this week, and the pair may continue to give back the rebound from back in November as the fundamental outlook for the U.S. improves. Nevertheless, we may see a short-term bounce in the exchange rate as the relative strength index comes up against oversold territory, but we will sell rallies in the EURUSD as it fails to maintain the upward trend carried over from the previous year.

Forecasts for a rebound in the Conference Board’s survey instills a bullish outlook for the greenback, and a positive development may set the stage for a long U.S. dollar trade as the fundamental outlook for the world’s largest economy improves. Therefore, if the index advances to 62.0 or higher in February, we will need to see a red, five-minute candle following the release to generate a sell entry on two-lots of EURUSD. Once these conditions are met, we will set the initial stop at the nearby swing high or a reasonable distance from the entry, and this risk will generate our first objective. The second target will be based on discretion, and we will move the stop on the second lot to cost once the first trade hits its mark in an effort to lock-in our gains.

On the other hand, as the ongoing weakness in the real economy along with the stickiness in underlying inflation may drag on household sentiment, and a dismal print may drag on the dollar as it raises the Fed’s scope to expand the balance sheet further. As a result, if the survey falls short of market expectations, we will implement the same setup for a long euro-dollar trade as the short position laid out above, just in reverse.

The gauge for U.S. household sentiment slipped to 58.6 from a revised 66.7 in December to mark the lowest reading since November 2011, while inflation expectations for the next 12-months advanced 5.7% during the same period to mark the first rise since August. The initial uptick in the EURUSD was short-lived, with the pair slipping back below the 1.3475 region, but the euro-dollar tracked higher going into the close as the exchange rate ended the day at 1.3490.