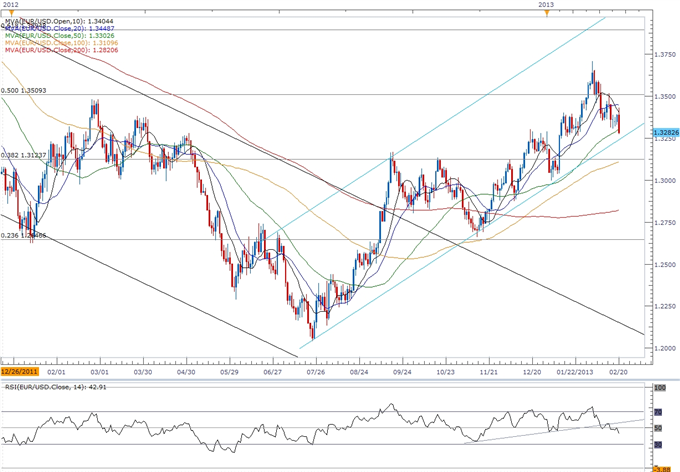 The headline reading for U.S. inflation is projected to increase 1.6% following the 1.7% rise in December, and ease price pressures may drag on the dollar as it raises the Fed’s scope to expand the balance sheet further. However, as a growing number of FOMC officials drop their dovish tone for monetary policy, a slower rate of price growth may have a limited impact in producing a bearish reaction in the USD, and we may see the bullish sentiment surrounding the greenback gather pace throughout 2013 as the central bank appears to be moving away from its easing cycle.

The ongoing improvement in household confidence along with the pickup in wage growth may encourage businesses to pass on higher costs onto consumers, and an uptick in the CPI should prop up the dollar as the pickup in growth and inflation dampens the Fed’s scope to expand the balance sheet further. However, firms across the U.S. may offer further discounts amid the recent slowdown in private sector consumption, and we may see the FOMC continue to carry out its easing cycle throughout the first-half of 2013 in an effort to encourage a stronger recovery.

As the relative strength index on the EURUSD fails to maintain the upward trend carried over from November, the pair looks poised for a move back towards the 38.2% Fibonacci retracement from the 2009 high to the 2010 low around 1.3120, and we may see the euro-dollar threaten the ascending channel from the previous year as the fundamental outlook for the U.S. improves. However, a decline in the CPI may produce a short-term rebound in the exchange rate as the EURUSD comes up against trendline support, and we may see the pair consolidate before making a move lower if the data heightens bets for a further expansion in the Fed’s balance sheet.

Expectations for a slower rate of inflation favors a bearish forecast for the greenback, but a stronger-than-expected print may pave the way for a long U.S. dollar trade as the Fed adopts a more neutral tone for monetary policy. Therefore, if the consumer price report tops market forecast, we will need to see a red, five-minute candle following the release to establish a sell entry on two-lots of EURUSD. Once these conditions are fulfilled, we will set the initial stop at the nearby swing high, and this risk will generate our first objective. The second target will be based on discretion, and we will move the stop on the second lot to breakeven once the first trade hits its mark in an effort to lock-in our gains.

In contrast, the slowdown in household spending along with lower input costs may drag on consumer prices, and weak inflation print may produce a selloff in the dollar as it raises the scope for more QE. As a result, if price growth slows in January, we will implement the same strategy for a long euro-dollar trade as the short position laid out above, just in the opposite direction.

U.S. consumer prices increased an annualized 1.7% after expanding 1.8% in November, while the core rate of inflation head steady at 1.9% for the second consecutive month. Although the initial reaction was fairly muted, the dollar lost ground during the North American trade, with the EURUSD ending the day at 1.3287.