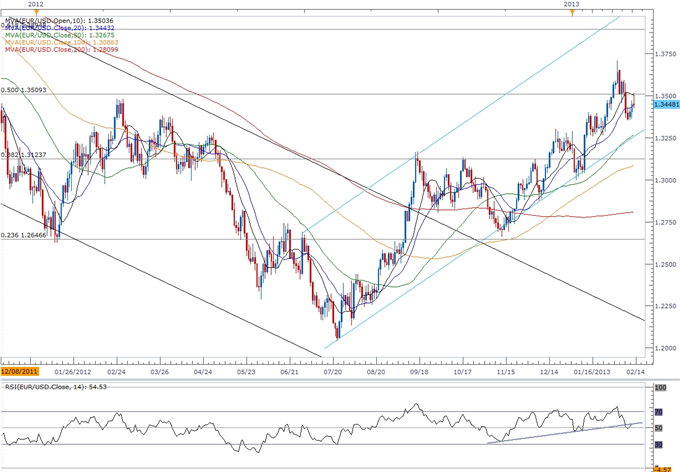 The euro-area is expected to contract another 0.4% in the fourth quarter, and the deepening recession may drag on the single currency as it fuels speculation for additional monetary support. As the economic downturn threatens price stability, European Central Bank President Mario Draghi has certainly struck a more dovish tone for monetary policy, and we may see the Governing Council push the benchmark interest rate to a fresh record-low in an effort to encourage a sustainable recovery.

The rebound in business outputs along with the rise in the trade surplus may limit the risk of seeing a sharp decline in the growth rate, and an better-than-expected print may increase the appeal of the single currency as it dampens the scope for further rate cuts. However, record-high unemployment paired with the slowdown in private sector consumption may produce an even larger dip in GDP, and a sharp downturn in economic activity should dampen the appeal of the euro as we anticipate the ECB to carry out its easing cycle throughout 2013.

We’re seeing the EURUSD struggle to push back above the 50.0% Fibonacci retracement from the 2009 high to the 2010 low around 1.3500, and the pullback from 1.3709 may turn into a larger correction should the 4Q GDP report fuel bets for another rate cut. Indeed, the bearish break in the relative strength index favors further downside for the euro-dollar, but a better-than-expected growth print may spark a sharp rebound in the exchange rate as it raises the fundamental outlook for Europe.

Trading the given event risk favors a bearish call for the single currency amid bets for a deepening recession, but a positive development may pave the way for a long Euro trade as market participants scale back bets for more easing. Therefore, if the GDP report tops market expectations, we will need a green, five-minute candle following the print to establish a long trade on two-lots of EURUSD. Once the condition are fulfilled, we will set the initial stop at the nearby swing low or a reasonable distance from the entry, and this risk will generate our first target. The second objective will be based on discretion, and we will move the stop on the second lot to cost once the first trade hits its mark in order to preserve our profits.

In contrast, the ongoing deterioration in the labor market along with the persistently slack in the real economy may produce a sharp decline in the growth rate, and the advance reading may instill a bearish outlook for the single currency should the print fuel fears of a prolonged recession in Europe. As a result, if GDP contracts 0.4% or greater during the last three-months of 2012, we will implement the same strategy for a short euro-dollar trade as the long position laid out above, just in the opposite direction.

The Euro-Zone slipped back into recession as economic activity contracted 0.1% in the third quarter, and the weakening outlook for the region may prompt the European Central Bank to expand monetary policy further in an effort to encourage a sustainable recovery. The Euro came under pressure following the print, with the EURUSD falling back towards the 1.2750 figure, but the market reaction was short-lived as the pair closed at 1.2779.