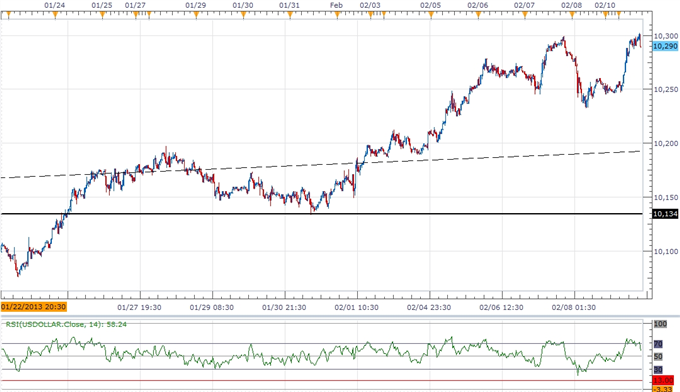 The Dow Jones-FXCM U.S. Dollar Index (Ticker: USDollar) is trading 0.36 percent higher from the open after moving 125 percent of its average true range, and the reserve currency may continue to track higher throughout the North American trade as risk sentiment falters. At the same time, we have FOMC board member Janet Yellen scheduled to speak on the economy later today, and the shift in central bank rhetoric should continue to prop up the dollar as market participants weigh the outlook for monetary policy. However, as the 30-minute relative strength index falls back from overbought territory, we may see a small pullback over the next 24 hours of trading, and we will continue to buy short-term dips in the greenback as the bullish sentiment surrounding the reserve currency gathers pace. 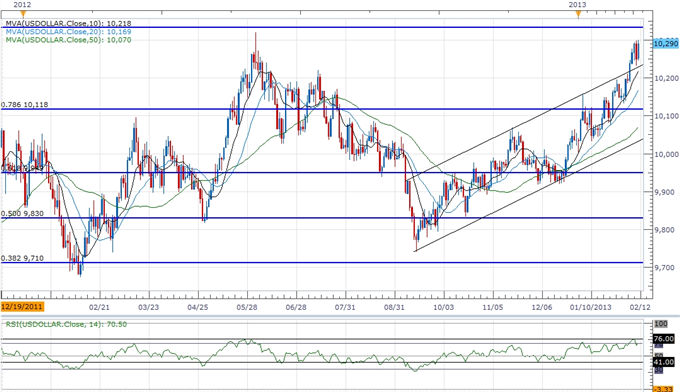 As the relatives strength index continues to come off of resistance (76), the USDOLLAR appears to have marked a failed run at the 2012 high (10,323), but we may see another push higher before we get a near-term correction should the economic docket continue to highlight an improved outlook for growth and inflation. Although the U.S. advance retail sales report is expected to show a slower pace of growth in January, we may see the figure top market expectations amid the resilience in private sector consumption. As Fed policy makers undermine the strength on the U.S. consumer, a larger-than-expected uptick in household spending should prompt the FOMC to adopt a more hawkish tone for monetary policy, and the central bank looks poised to halt its easing cycle later this year as the economy gets on a more sustainable path.

The greenback rallied against three of the four components, led by a 0.89 percent decline in the British Pound, while the Japanese Yen shed 0.79 percent as government officials continued to call for additional monetary support. Although Japanese Finance Minister Taro Aso argued that the marked depreciation in the Japanese Yen may have been too sudden, Asia Development Bank President Haruhiko Kuroda – a potential candidate to replace Bank of Japan Governor Masaaki Shirakawa – said further monetary easing can be justified for 2013, and the ongoing efforts to stem the risk for deflation should continue to dampen the appeal of the Japanese Yen as region remains poised to face negative real interest rates. In turn, we will maintain a bullish outlook for the USDJPY, and will look to buy dips in the exchange rate as long as the relative strength index holds above support (60).