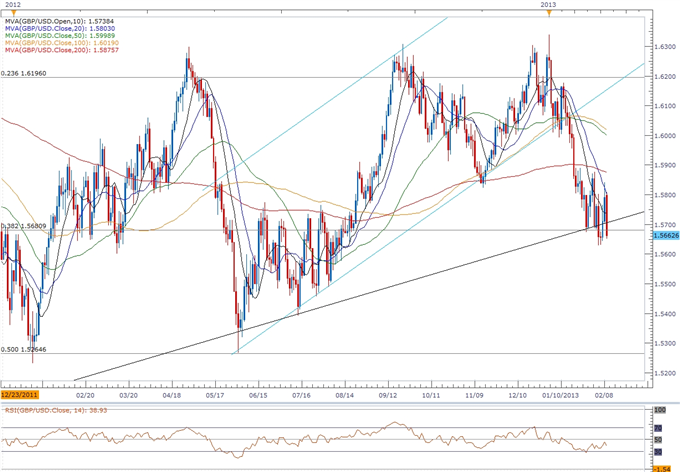 U.K. consumer prices are projected to increase 2.7% for the fourth consecutive month in January, and the lack of stronger price growth may weigh on the British Pound as market participants still see scope for more quantitative easing. At the same time, there’s speculation that the Bank of England will lower its growth forecast while delivering its quarter inflation report due out later this week, and a soft CPI print may encourage the central bank to strike a more neutral tone for monetary policy in an effort to encourage a stronger recovery.

The ongoing expansion in private sector credit along with the improvement in the labor market may encourage businesses to pass on higher costs onto consumers, and an unexpected uptick in the headline reading for inflation may prompt the BoE to adopt a more hawkish tone for monetary policy as price growth is expected to hold above target over the policy horizon. However, fears of a triple-dip recession along with the slowdown in household spending may push firms to offer discounted prices, and a soft CPI print may drag on the local currency as it raises the scope for additional monetary support.

As the GBPUSD continues to threaten the bullish trend dating back to 2009, a dismal CPI print may prompt the pair to give back the rebound from the previous year, and the sterling may work its way back towards the 50.0% Fibonacci retracement from the 2009 low to high around 1.5260 should the BoE inflation report highlight a greater willingness to expand the balance sheet further. However, a stronger-than-expected inflation report should a more meaning rebound in the exchange rate, and we may see the pound-dollar make another run at the 1.6300 figure as it appears to be carving out a higher low.

Trading the given event risk may not be as clear cut as some of our previous trades as the headline reading for inflation is expected to hold steady in January, but an uptick in price growth should pave the way for a long British Pound trade as market participants scale back bets for more QE. Therefore, if the consumer price report tops market expectations, we will need a green, five-minute candle following the release to establish a long entry on two-lots of GBPUSD. Once these conditions are fulfilled, we will set the initial stop at the nearby swing low or a reasonable distance from the entry, and this risk will generate our first target. The second objective will be based on discretion, and we will move the stop on the second lot to cost once the first trade hits its mark in order to lock in our profits.

On the other hand, the recent weakness in private sector consumption along with fears of another recession may drag on consumer prices, and a weak print may spark a sharp selloff ahead of the BoE inflation report as it fuels speculation for more easing. As a result, if the development misses forecast, we will implement the same strategy for a short pound-dollar trade as the long position mentioned above, just in reverse.

The headline reading for U.K. held steady at 2.7% for the third consecutive month in December, while the core rate unexpectedly slipped to 2.4% to mark the first decline since August. Indeed, the downtick in underlying inflation dragged on the British Pound, with the GBPUSD slipping below the 1.6075 figure, and the sterling struggled to hold its ground throughout the North America trade as the pair closed at 1.6062.