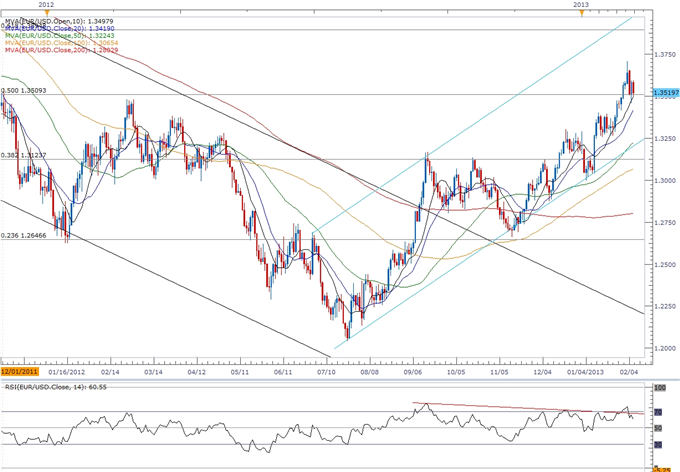 Although the European Central Bank (ECB) is widely expected to keep the benchmark interest rate at 0.75%, the policy statement from the Governing Council may dampen the appeal of the single currency should the central bank show a greater willingness to ease monetary policy further. As fears surrounding the debt crisis subsides, the ECB may now look to address the downside risks surrounding the region, and we may see a growing number of central bank officials favor additional rate cuts as the economic downturn threatens price stability.

As the euro-area continues to benefit from global trade, the ongoing improvement in confidence may encourage the ECB to soften its dovish tone for monetary policy, and the interest rate decision may increase the appeal of the single currency should central bank President Mario Draghi talk down bets for a rate cut. However, as record-high unemployment dampens the outlook for growth, the persistent weakness in the real economy should continue to drag on inflation, and the Governing Council may see scope to push the key interest rate to a fresh record-low in an effort to steer the euro-area out of recession.

As the EURUSD trades within the previous day’s range, we should see the pair consolidate going in to the ECB interest rate decision, and the pullback from 1.3709 may turn into a more meaningful reversal as the relatives strength index comes off of overbought territory. However, comments dampening bets for further rate cuts should prop up the single currency, and we may see the euro-dollar make another run at the 1.3750 figure should President Draghi sound more upbeat this time around.

Trading the given event risk may not be as clear cut as some of our previous trades as the ECB is widely expected to maintain its current policy, but we may see the Governing Council strike a more upbeat tone amid signs of stabilization in the euro-area. Therefore, if President Draghi adopts a more neutral tone for monetary policy and sees limited scope for a rate cut, we will need to see a green, five-minute candle following the statement to generate a buy entry on two-lots of EURUSD. Once these conditions are met, we will set the initial stop at the nearby swing low or a reasonable distance from the entry, and this risk will establish our first target. The second objective will be based on discretion, and we will move the stop on the second lot to breakeven once the first trade hits its mark in an effort to secure our gains.

In contrast, the Governing Council may sound more cautious this time around as the prolonged recession threatens price stability, and we may see a growing number of ECB officials show a greater willingness to ease policy further in order to stem the downside risks for growth and inflation. As a result, if President Draghi strikes a highly dovish tone for monetary policy, we will implement the same setup for a short euro-dollar trade as the long position mentioned above, just in reverse.

The European Central Bank (ECB) propped up the EURUSD following the rate decision as the Governing Council held an improved outlook for the euro-area and talked down speculation for additional monetary support. In turn, the more neutral tone struck by ECB President Mario Draghi pushed the EURUSD back above the 1.3150 figure, and the single currency gained ground throughout the North American trade as the pair ended the day at 1.3265.