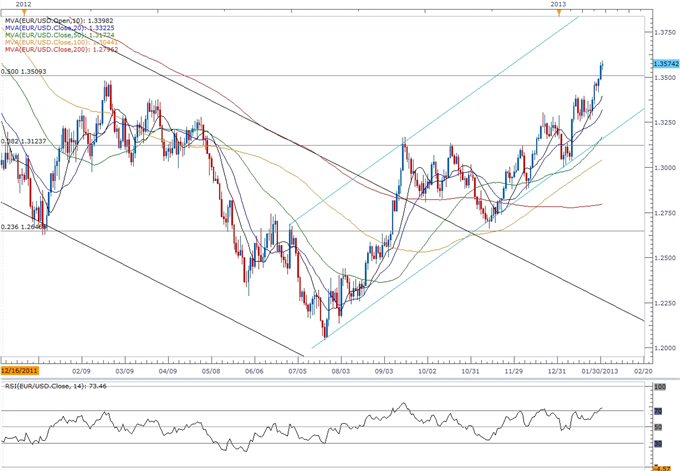 The highly anticipated U.S. Non-Farm Payroll report will be covered by DailyFX’s own Christopher Vecchio in the DailyFX Plus Live Trading Room!

U.S. Non-Farm Payrolls are projected to increase another 165K in January and the ongoing improvement in the labor market may increase the appeal of the U.S. dollar as it dampens the Fed’s scope to expand the balance sheet further. At the same time, we may see another uptick in the jobless rate as discouraged workers return to the labor force, and a round of positive developments may encourage the FOMC to conclude its easing cycle later this year as the world’s largest economy gets on a more sustainable path.

The resilience in private sector consumption along with the budding recovery in the housing market may prompt businesses to ramp up on hiring, and a marked expansion in U.S. employment should spark a bullish reaction in the greenback as it fosters an improved outlook for growth. However, the slowdown in business outputs paired with the drop on confidence may push firms to keep a lid on their force, and a weak job growth figure may trigger a selloff in the reserve currency as the FOMC keeps the door open to expand monetary policy further.

As the relative strength index on the EURUSD pushes into overbought territory, the pair looks poised for a correction, and the U.S. Non-Farm Payrolls report may serve as the fundamental catalyst to spark a reversal in the exchange rate should the print dampen expectations for more quantitative easing. However, the upward trend in the EURUSD may continue to take shape should the data fall short of market expectations, and we may see the pair continue to retrace the decline from back in 2011 as the FOMC maintains a cautious tone for the U.S. economy.

Forecasts for an uptick in job growth certainly encourages a bullish outlook for the reserve currency, and a batch of positive developments may set the stage for a long U.S. dollar trade as market participants scale back bets for more easing. Therefore, if NFPs increase 165K or greater in January, we will need a red, five-minute candle following the release to generate a sell entry on two-lots of EURUSD. Once these conditions are met , we will set the initial stop at the nearby swing high or a reasonable distance from the entry, and this risk will establish our first objective. The second target will be based on discretion, and we will move the stop on the second lot to cost once the first trade hits its mark in an effort to lock-in our gains.

In contrast, the slowdown in business outputs paired with the ongoing slack in the real economy may continue to drag on the labor market, and a dismal employment print may dampen the appeal of the greenback as it fuels speculation for more QE. As a result, if NFPs fall short of market expectations, we will implement the same strategy for a long euro-dollar trade as the short position laid out above, just in reverse.

The U.S. economy added another 155K in December following the 161K rise the month prior, while the jobless rate unexpectedly increased to 7.8% from 7.7% as discouraged workers returned to the labor force. Despite the muted reaction, the dollar lose ground during the North American trade, with the EURUSD trading back above the 1.3075 region, and the reserve currency ended the day lower as the pair closed at 1.3066.