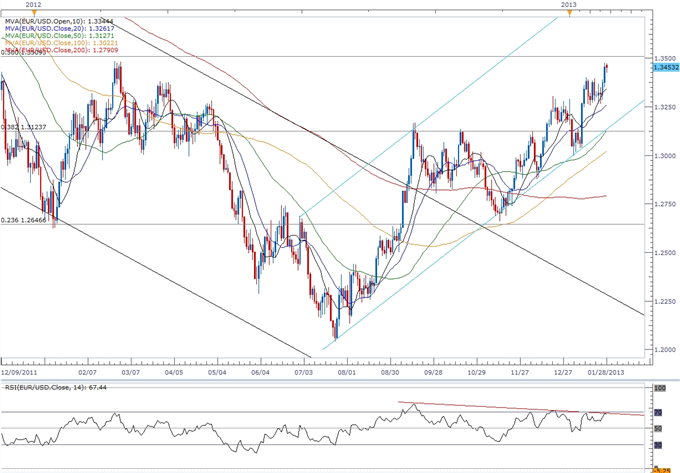 The advanced GDP report is expected to show the world’s largest economy expanding at an annual rate of 1.1% in the fourth-quarter, and the slower rate of growth may dampen the appeal of the U.S. dollar as it fuels bets for additional monetary support. However, as a growing number of Fed officials highlight a more broad-based recovery, a positive development may spark a short-term rally in the reserve currency, and we may see the central bank scale back its willingness to expand the balance sheet further as the outlook for growth and inflation picks up.

The resilience in private sector consumption along with the budding recovery in the housing market may prompt a stronger-than-expected GDP, and we may see the FOMC conclude its easing cycle later this year as economic activity gradually gathers pace. However, the slowdown in business outputs may drag on the growth rate, and we may see Fed Chairman Ben Bernanke keep the door open to expand monetary policy further as the outlook for inflation remains broadly balanced.

Although we’re seeing the EURUSD preserve the upward trend carried over from the previous year, the relative strength index is coming up against trendline resistance, and the bearish divergence in the oscillator may continue to take shape as the pair struggles to clear the 50.0% Fibonacci retracement from the 2009 high to the 2010 low around 1.3500. In turn, the 4Q GDP report may serve as the fundamental catalyst to generate a clearer directional bias for the near-term, but the market reaction may be short-lived as currency traders turn their attention to the FOMC interest rate decision.

Despite forecasts for a slower rate of growth, a positive development may pave the way for a long U.S. dollar trade as the data dampens bets for more quantitative easing. Therefore, if the growth rate expands 1.1% or greater, we will need to see a red, five-minute candle following the release to establish a short trade on two-lots of EURUSD. Once these conditions are fulfilled, we will set the initial stop at the nearby swing low or a reasonable distance from the entry, and this risk will generate our first target. The second objective will be based on discretion, and we will move the stop on the second lot to cost once the first trade hits its mark in an effort to lock-in our gains.

In contrast, the ongoing slack in the labor market along with the slowdown in business outputs may drag on the economy, and a dismal growth report may spark a bearish reaction in the USD as it fuels speculation for additional monetary support. As a result, if GDP fails to meet or exceed market expectations, we will implement the same strategy for a long euro-dollar as the short position laid out above, just in reverse.

Economic activity in the U.S. increased an annualized 2.0% after growing 1.3% during the three-months through June, while personal consumption climbed 2.0% during the same period amid forecasts for a 2.1% print. Despite the better-than-expected GDP print, the development pushed the EURUSD back above the 1.2900 figure as market participants increased their appetite for risk.