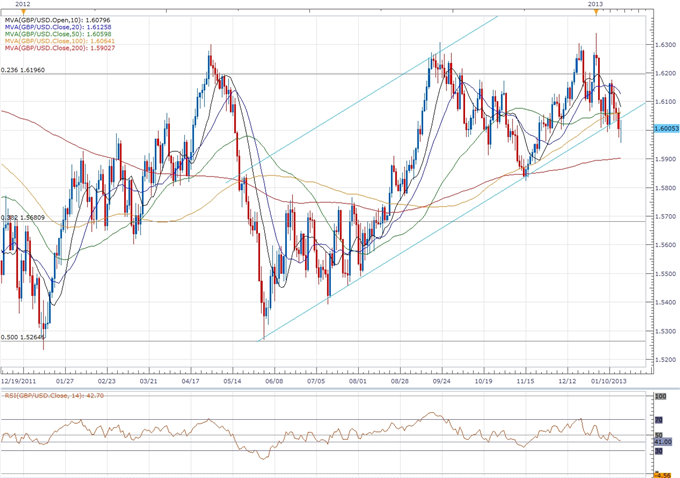 U.K. retail sales are projected to increase another 0.1% in December and the pickup in private sector consumption should prop up the sterling as it dampens the Bank of England’s (BoE) scope to expand its balance sheet further. As the BoE sees above-target inflation over the policy horizon, the ongoing improvement in household spending may spur faster price growth in 2013, and we may see the central bank shift gears later this year as the U.K. emerges from the double-dip recession.

As the Funding for Lending Scheme starts to work its way through the real economy, the expansion in private sector credit along with the recent improvements in the labor market may spur a strong consumption report, and a positive development may spark a more meaningful rebound in the exchange rate as it curbs bets for more quantitative easing. However, fears of another economic contraction along with the slowdown in wage growth may prompt households to scale back on spending, and a further slowdown in private sector consumption may dampen the appeal of the sterling as the Monetary Policy Committee keeps the door open to expand its asset purchase program beyond the GBP 375B target.

Although we’re seeing the GBPUSD threaten the upward trend dating back to June, we will maintain our bullish forecast for the pound-dollar as the pair persistently closes above the 1.6000 figure. As the relative strength index continues to find interim support around the 41 region, the rebound from the 2013 low (1.5954) may gather pace ahead of the BoE Minutes due out on January 23, and we may see the GBPUSD make another run at the 1.6300 should the data dampen expectations for more easing.

Forecasts for a second consecutive rise in U.K. retail sales encourages a bullish forecast for the sterling, and a positive development may pave the way for a long British Pound trade as the data raises the outlook for growth. Therefore, if spending increases 0.1% or greater, we will need a green, five-minute candle subsequent to the release to generate a buy entry on two-lots of GBPUSD. Once these conditions are met, we will set the initial stop at the nearby swing low or a reasonable distance from the entry, and this risk will establish our first objective. The second target will be based on discretion, and we will move the stop on the second lot to cost once the first trade hits its mark in order to preserve our profits.

On the other hand, weaker wage growth paired with the ongoing slack in the real economy may drag on household spending, and a dismal consumption report may spark a selloff in the exchange rate as it dampens the outlook for growth and inflation. As a result, if the sales report falls short of market expectations, we will implement the same strategy for a short pound-dollar trade as the long position laid out above, just in reserve.

Impact that U.K. Retail Sales has had on GBP during the last release

Household spending increased 0.1% in November following the 0.5% contraction the month prior, while retail sales including auto fuel held flat during the same period amid forecasts for a 0.4% print. The initial reaction to the weaker-than-expected sales report was short-lived as the GBPUSD quickly retraced the decline to 1.6253, and the sterling gained ground throughout the North American trade as the pair ended the day at 1.6277.