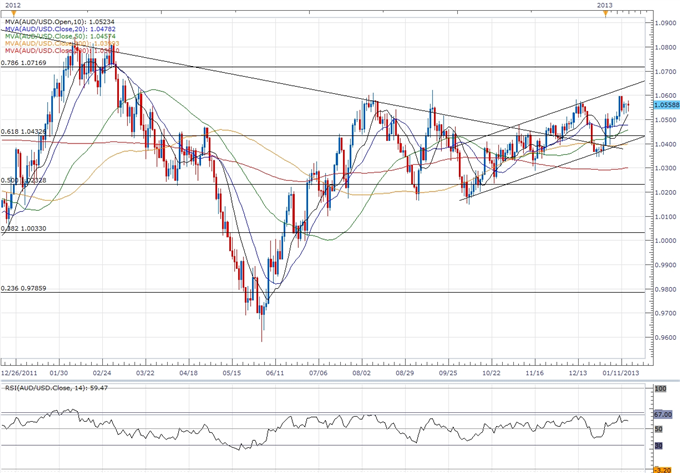 The Australian economy is expected to add another 4.5K jobs in December and the ongoing improvement in the labor market may spark a bullish reaction in the AUDSD as it dampens speculation for additional monetary support. However, the Reserve Bank of Australia (RBA) held a rather cautious tone for the $1T economy after cutting the benchmark interest rate to 3.00% at the last meeting on December 3, and a dismal employment report may prompt the central bank to further embark on its easing cycle as policy makers look for a stronger recovery.

The rise in business inventories along with the expansion in private investments may encourage a strong uptick in employment, and a positive development may increase the appeal of the aussie as the data dampens expectations for another rate cut. However, as the resource boom comes to an end, the drop in global trade paired with the slowdown in private sector consumption may drag on hiring, and we may see businesses keep a lid on their labor force as the region faces an uneven recovery.

Although the AUDUSD continues to trade within the upward trending channel dating back to October, the relative strength index remains capped by the 67 figure, and the pair could be carving out a lower top just below the 1.0600 figure as the oscillator comes off of overbought territory. In turn, we may see the aussie-dollar fall back towards the 61.8% Fibonacci retracement from the 2011 high to low around 1.0430, but we may see the high-yielding currency threaten the bullish trend carried over from the previous year should the employment report fuel bets for more monetary support.

Forecasts for another rise in employment encourages a bullish forecast for the high-yielding currency, and a positive development may set the stage for a long Australian dollar as market participants scale back bets for another rate cut. Therefore, if the $1T economy adds 4.5K jobs or more in December, we will need to see a green, five-minute candle following the print in order to generate a buy entry on two-lots of AUDUSD. Once these conditions are met, we will set the initial stop at the nearby swing low or a reasonable distance from the entry, and this risk will establish our first objective. The second target will be based on discretion, and we will move the stop on the second lot to cost once the first trade hits its mark in an effort to lock-in our gains.

In contrast, the ongoing weakness in the real economy paired with the slowdown in global trade may sap hiring, and a dismal print should drag on the exchange rate as it dampens the fundamental outlook for the region. As a result, if employment falls short of market expectations, we will carry out the same strategy for a short aussie-dollar trade as the long position laid out above, just in the opposite direction.

Australian employment increased another 10.7K in November after expanding a revised 10.2K the month prior, while the jobless rate slipped to 5.2% from 5.4% as discouraged workers left the labor force. The unexpected rise in job growth sparked a bullish reaction in the Australian dollar, with the AUDUSD climbing above the 1.0450 figure, and we saw the high-yielding currency gain ground throughout the day as the pair closed at 1.0484.