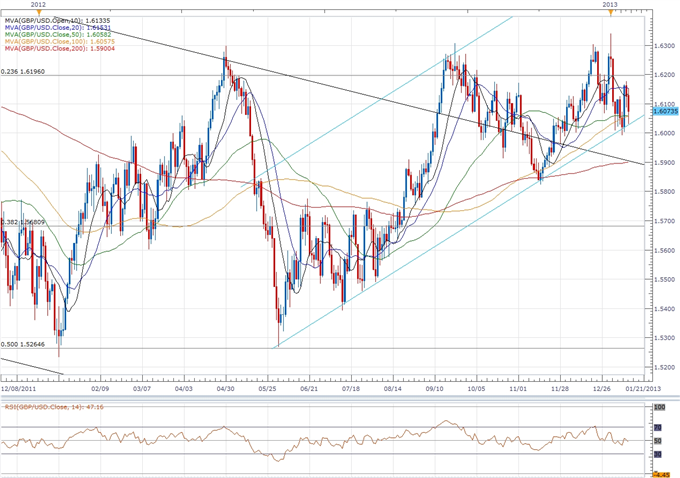 The headline reading for inflation is projected to hold steady at 2.7% in December, but heightening price pressures in the U.K. may produce a stronger-than-expected print as the economy emerge from the double-dip recession. As the Bank of England (BoE) sees above-target inflation over the policy horizon, a growing number of central bank officials are starting to adopt a hawkish tone for monetary policy, and the Monetary Policy Committee looks to be slowly moving away from its easing cycle as the rebound in economic activity raises the outlook for price growth.

The rebound in private sector credit along with the improvement in the labor market may encourage businesses to scale back on discounting, and an unexpected uptick in consumer prices may trigger a bullish reaction in the GBPUSD as it dampens the BoE’s scope to expand its balance sheet further. However, the ongoing weakness in the real economy paired with the slowdown in private sector consumption may prompt U.K. firms to keep a lid on consumer prices in an effort to draw demand.

As the GBPUSD maintains the upward trending channel carried over from the previous year, sticky price pressures in the U.K. may produce a more meaningful rebound in the exchange rate, and we may see the pound-dollar work its way back towards the 1.6300 figure should the CPI print dampen speculation for more quantitative easing. However, fears of a protracted recovery may limit the upside risk for inflation as households and businesses sentiment remains weak, and a dismal consumer price report may drag on the sterling as it fuels bets for additional monetary support.

Trading the given event risk may not be as clear cut as some of our previous trades as the headline reading for inflation is expected to hold steady in December, but an above-forecast print could pave the way for a long British Pound trade as it dampens the scope for more easing. Therefore, if consumer prices increase an annualized 2.7% or greater, we will need to see a green, five-minute candle following the print to generate a long entry on two-lots of GBPUSD. Once these conditions are met, we will set the initial stop at the nearby swing low or a reasonable distance from the entry, and this risk will establish our first objective. The second target will be based on discretion, and we will move the stop on the second lot to cost once the first trade hits its mark in an effort to lock-in our gains.

In contrast, the ongoing weakness in private sector activity along with subdued wage growth may drag on inflation, and a weak CPI print may dampen the appeal of the sterling as market participants still see scope for more QE. As a result, if price growth falters, we will carry out the same setup for a short pound-dollar trade as the long position laid out above, just in the opposite direction.

U.K. consumer prices increased 2.7% for the second month in November, while the core reading for inflation held steady at 2.6% amid forecast for a 2.7% print. Nevertheless, we saw a fairly muted reaction to the release as the data failed to meet market expectations, but we saw the British Pound gain ground during the North American trade as the GBPUSD ended the day at 1.6250.