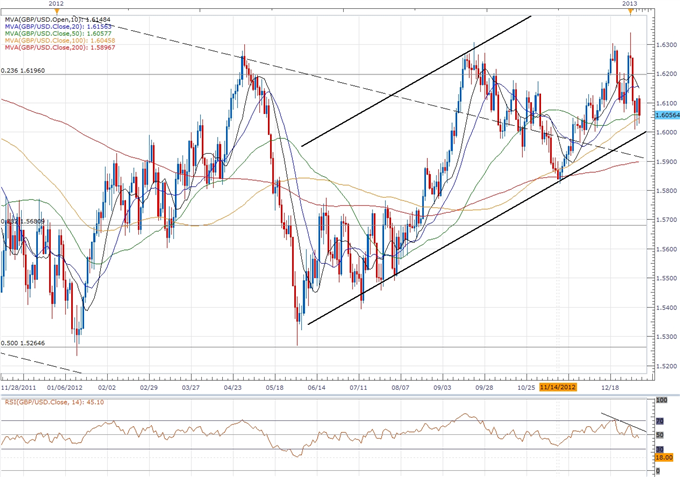 Although the Bank of England (BoE) is widely expected to maintain its current policy in January, a fresh batch of central bank rhetoric could shake up the British Pound as the Monetary Policy Committee appears to be moving away from its easing cycle. As the U.K. emerges from the double-dip recession, a growing number of central bank officials are scaling back their willingness to expand the balance sheet further, and we may see the BoE switch gears later this year in an effort to balance the risks surrounding the region.

As the BoE sees the headline reading for inflation holding above the 2% target over the near to policy horizon, the rebound in private sector credit along with the ongoing improvement in the labor market may encourage the central bank adopt a more hawkish tone for monetary policy, and we may see the committee start to discuss a tentative exit strategy as the fundamental outlook for the U.K. improves. However, the ongoing slack within the real economy paired with the slowdown in private sector consumption may prompt the BoE to maintain a highly accommodative policy stance, and the central bank may stick to the sidelines in 2013 as the European debt crisis continues to dampen the outlook for growth.

As the British Pound maintains the upward trending channel carried over from the previous year, a shift in the policy outlook should spark a move back towards the 1.6300 figure, and we will retain our bullish forecast for the GBPUSD as the BoE looks to address the heightening risk for inflation. However, as the relative strength index falls back from overbought territory, there appears to bearish divergence in the oscillator, and we may see the sterling fail to maintain the series of higher highs and higher lows should the central bank keep the door open to expand its balance sheet further.

Trading the rate decision may not be as clear cut as some of our previous trades, but we would need to hear a more hawkish tone from the BoE to pave the way for a long British Pound trade. Therefore, if the central bank scales back its willingness to ease policy further, we will a green, five-minute candle following the announcement to establish a buy entry on two-lots of GBPUSD. Once these conditions are met, we will set the initial stop at the nearby swing low or a reasonable distance from the entry, and this risk will generate our first objective. The second target will be based on discretion, and we will move the stop on the second lot to breakeven once the first trade hits its mark in an effort to lock-in our gains.

On the other hand, the BoE may continue to strike a cautious tone for the region as the fundamental outlook remains clouded with high uncertainty, and the central bank may highlight a greater willingness to expand its balance sheet further in an effort to encourage a stronger recovery. As a result, if Governor King sees scope to expand the asset purchase program beyond the GBP 375B target, we will carry out the same setup for a short pound-dollar trade as the long position laid out above, just in the opposite direction.

The Bank of England refrained from releasing a policy statement as the central bank preserved its current policy in December, and it seems as though the Monetary Policy Committee will remain on the sidelines over the near to medium-term as the U.K. emerges from the double-dip recession. The British Pound edged higher following the announcement, with the GBPUSD trading above the 1.6110 figure, but the sterling struggled to hold its ground during the North American trade as the pair ended the day at 1.6048.