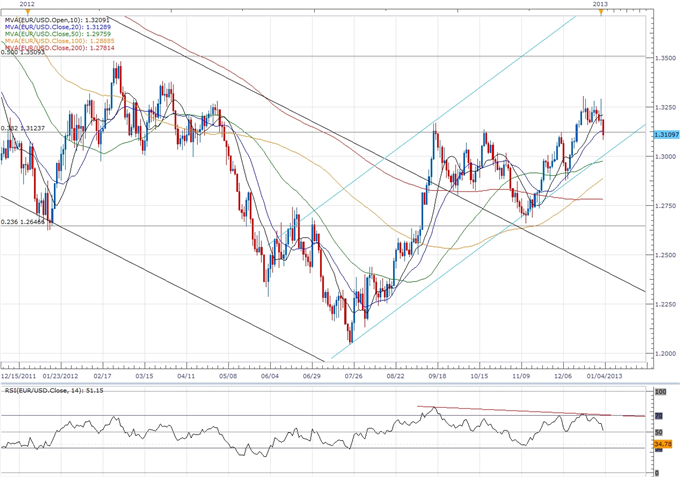 The world’s largest economy is expected to add another 151K jobs in December and the ongoing improvement in the labor market should heighten the appeal of the U.S. dollar as it limit’s the Fed’s scope to expand monetary policy further. Indeed, the more broad-based recovery may encouraged the FOMC to strike a more neutral in 2013, and we may see the central bank bring its easing cycle to an end later this year as the economic recovery gradually gathers pace.

The rebound in wage growth paired with the resilience in private sector consumption may help to prop up the labor market, and a marked rise in employment may encourage the Fed to soften its dovish tone for monetary policy as the economic recovery gradually gathers pace. However, the ongoing slack in the housing market along with the recent weakness in consumer sentiment may drag on hiring, and a dismal development may foster a bearish outlook for the greenback as it fuels speculation for additional monetary support.

As the EURUSD struggles to maintain the range-bound price action and slips back below the 38.2% Fibonacci retracement from the 2009 high to the 2010 low around 1.3120, we may see a more meaningful reversal from the 1.3300 figure should NFPs sap bets for additional monetary support. However, speculation for more easing may drag on the dollar as the Fed keeps the door open to expand its balance sheet further, and we may see the EURUSD make another run at the December highs should the data instill a weakening outlook for the world’s largest economy.

Expectations for a faster rate of job growth encourages a bullish outlook for the greenback, and a positive print may pave the way for a long U.S. dollar trade as it raises the fundamental outlook for the world’s largest economy. Therefore, if NFPs increase 152K or greater, we will need to see a red, five-minute candle following the release to establish a sell entry on two-lots of EURUSD. Once these conditions are met, we will place the initial stop at the nearby swing high or a reasonable distance from the entry, and this risk will generate our first target. The second objective will be based on discretion, and we will move the stop on the second lot to cost once the first trade hits its mark in an effort to lock-in our profits.

On the other hand, the persistent weakness in the real economy may push businesses to scale back on hiring, and a dismal employment report may dampen the appeal of the dollar as the Fed retains a dovish tone for monetary policy. As a result, if the employment report falls short of market expectations, we will implement the same strategy for a long euro-dollar trade as the short position mentioned above, just in reverse.

U.S. Non-Farm Payrolls increased 146K in November following a revised 138K expansion last month, while the jobless rate slipped to 7.7% from 7.9% as discouraged workers left the labor force. We saw the EURUSD struggle to hold above the 1.2900 figure initially following the print, but the dollar struggled to hold its ground throughout the North American trade as the pair ended the day at 1.2926.